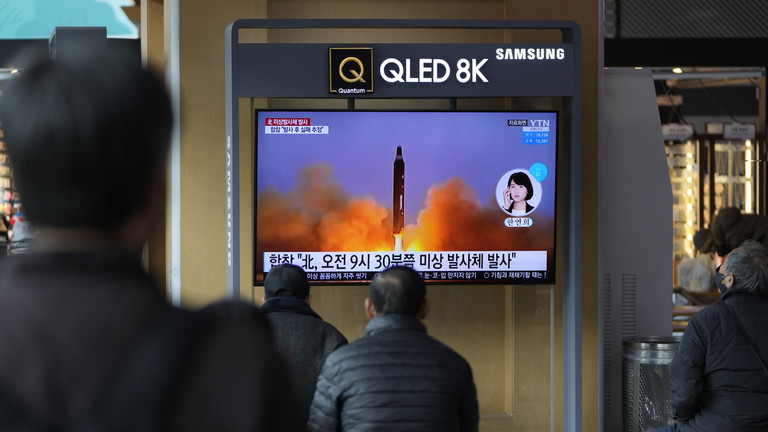 North Korea fired an “unidentified projectile” on Wednesday, but it appears to have failed moments after takeoff, the South Korean military has said.
Reports of a botched missile test by Pyongyang first appeared in Japanese media and were later echoed by Seoul.

“North Korea fired an unknown projectile… but it is presumed that it failed immediately after launch,” the South Korean Joint Chiefs of Staff said in a statement.

According to the statement, the launch took place in an area near the airport of Pyongyang, which was the site of several earlier tests of what the US claims were intercontinental ballistic missiles (ICBMs).

NK News website, which follows events in North Korea, said witnesses reported hearing a loud “blowing” sound – similar to that of a large plane – and the sound of a loud “crash” after that. There were also images available of a smoke cloud in the sky above the North Korean capital, the outlet added.

The US Indo-Pacific Command later said that it was a ballistic missile launch, while urging the North to “refrain from further destabilizing acts.”

Pyongyang is believed to have carried out a record nine weapons tests this year, with the latest staged on March 5.

North Korea maintains that at least two of the launches were a “reconnaissance satellite,” but Seoul and Washington insist they were all part of work on a new intercontinental ballistic missile system, dubbed the ‘monster missile’.

A nuclear-capable ICBM can travel a distance of around 5,500km (3,417 miles), putting the US in range of a possible strike by Pyongyang.

North Korea is banned from ballistic missile and nuclear tests by the UN, which imposed harsh sanctions on the country.

Pyongyang had placed a moratorium on such activities in 2018 after the beginning of peace talks between North Korean leader Kim Jong-un and then-US President Donald Trump. But the negotiations stalled over Washington’s unwillingness to lift sanctions, with Kim saying in 2020 that the testing would resume.

South Korea and the US have also recently accused the North of trying to restore the tunnels at the Punggye-ri site, where it conducted six nuclear weapons tests between 2006 and 2017.