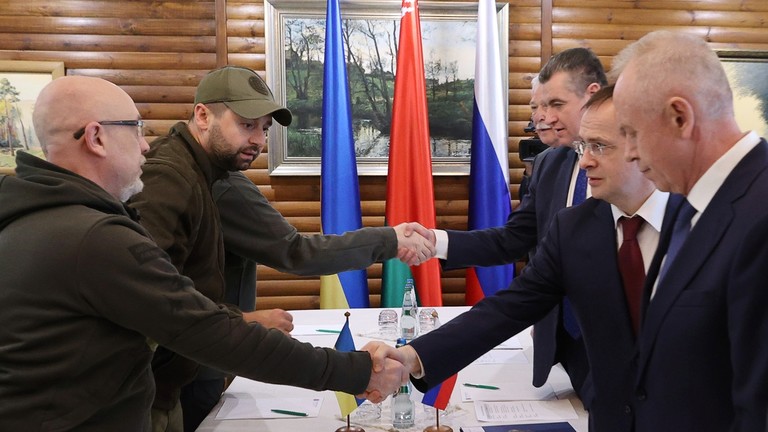 The Kremlin has said that a report in the Financial Times about a supposed 15-point draft peace plan with Ukraine was false.

Replying to a reporter’s question on Thursday if Russia and Ukraine were close to sign a peace deal, Dmitry Peskov, Kremlin spokesman, said: “No, the work continues [on the matter].” He added Russia will inform the public of any breakthrough in the talks.

The statement comes after the Financial Times reported on Wednesday that the sides had made “significant progress” and were discussing a 15-point draft plan, which would include the withdrawal of Russian troops, and Ukraine becoming a neutral state in exchange for protection by Western allies.

Peskov confirmed that some of the issues mentioned by FT were on the agenda but dismissed the overall report as “essentially false.”

Mykhailo Podolyak, a member of the Ukrainian negotiating team, said that the draft from the FT report represented what Russia wanted from Kiev and “nothing more.” He reiterated that Kiev was seeking a ceasefire, the withdrawal of Russian forces, and legally binding security guarantees.

The head of the Russian delegation, Vladimir Medinsky, meanwhile, said on Wednesday that Ukraine tabled a proposal for it to become a non-aligned state, like Sweden or Austria.

Russia has been demanding that Ukraine officially declares itself a neutral country, renouncing a bid to join NATO. Ukrainian officials previously said they were ready to discuss the matter with Moscow.

Moscow attacked its neighbor following a seven-year standoff over Ukraine’s failure to implement the terms of the Minsk agreements, and Russia’s eventual recognition of the Donbass republics in Donetsk and Lugansk. The German- and French-brokered protocols had been designed to regularize the status of those regions within the Ukrainian state.

Kiev insists the Russian offensive was completely unprovoked and has denied claims it was planning to retake the two republics by force.