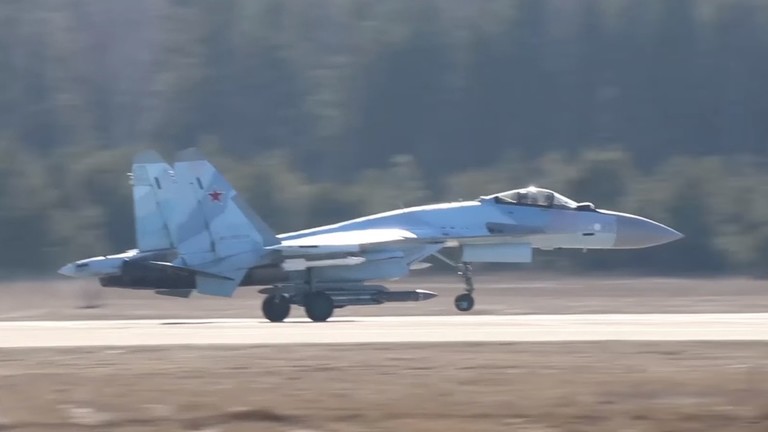 Russia says it’s struck another mercenary base in Ukraine

More than 100 Ukrainian special ops troops and foreign soldiers of fortune were eliminated, according to Moscow

A Ukrainian Special Operations Forces training center near the town of Ovruch in the northern Zhytomyr Region, which hosted the mercenaries, was targeted by “high-precision air-launched missiles,” ministry spokesman Igor Konashenkov said during a briefing.

The airstrike has eliminated more than 100 Ukrainian special ops troops and foreign soldiers of fortune, he added.

A week ago, Russia destroyed another mercenary base at the Yavoriv range in the western Lviv region, saying that up to 180 foreign fighters were killed there.

Kiev disputed those numbers and put the death toll at 35 people. It also insisted that all those who died in the attack were Ukrainian.

However, after the strike, reports emerged of mercenaries fleeing to neighboring Poland in large numbers. Some would-be combatants have complained on social media and in interviews that the conflict turned out not to be what they expected.

Russia has warned that it was aware of all the locations of mercenaries on the territory of Ukraine and promised to continue targeting them “without mercy.”

“All further responsibility for the death of this category of foreign citizens in Ukraine rests solely with the leadership of these countries,” who encourage its people to answer to Kiev’s repeated calls for help in the conflict, Konashenkov said last week.

Moscow sent its troops into Ukraine last month following a seven-year standoff over Kiev’s failure to implement the terms of the Minsk agreements, and Russia’s eventual recognition of the breakaway Donbass republics of Donetsk and Lugansk.

The German- and French-brokered protocols had been designed to regularize the status of those regions within the Ukrainian state.

Russia has now demanded that Ukraine officially declare itself a neutral country that will never join the US-led NATO military bloc.

Kiev insists the Russian offensive was completely unprovoked and has denied claims it had been planning to retake the two republics by force.