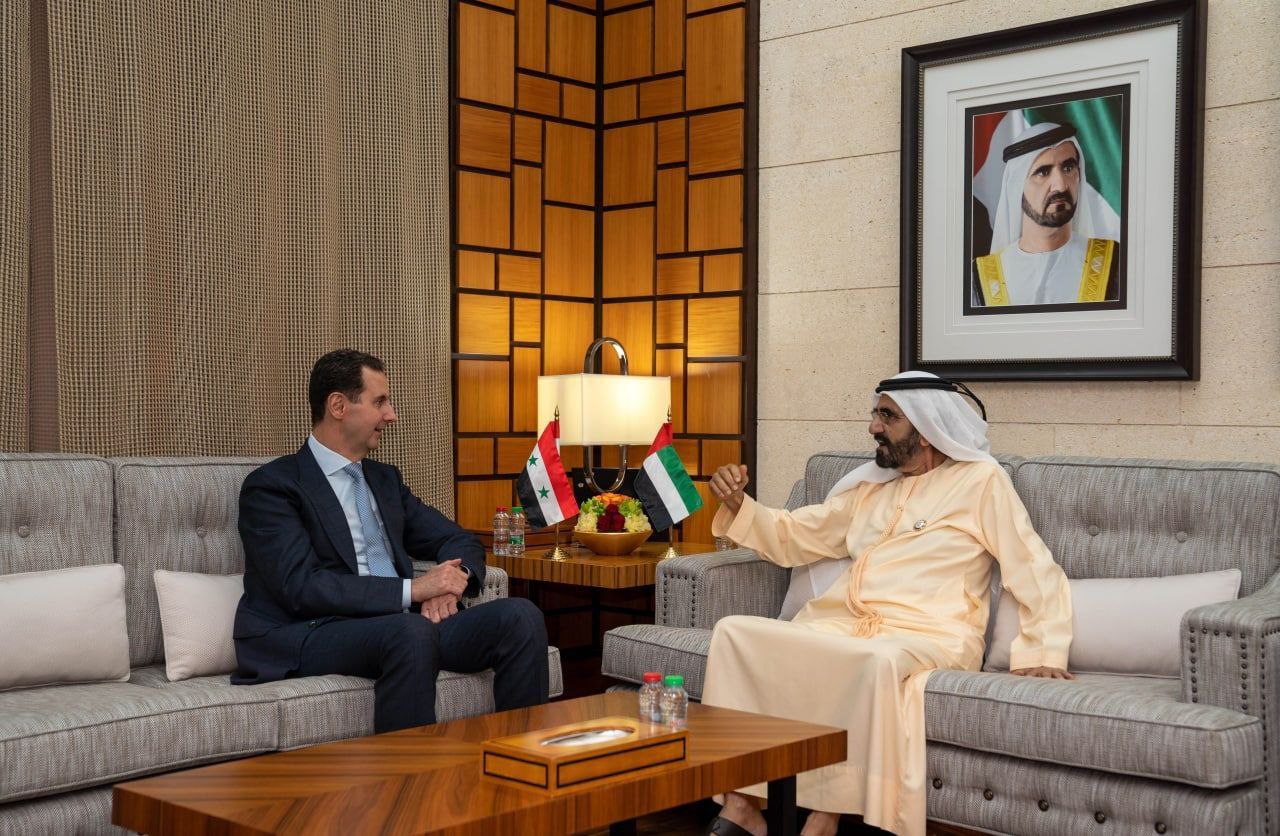 Syrian President Bashar al-Assad visited the United Arab Emirates (UAE) on Friday, his first visit to an Arab state since the Syrian conflict began in 2011, during which Assad had only visited Iran and Russia.

Assad met Abu Dhabi Crown Prince Sheikh Mohammed bin Zayed al-Nahyan (MBZ) demonstrating a new relationship, and the UAE move away from the failed US-EU-NATO attack on Syria for ‘regime change’.  MBZ stressed that Syria is a fundamental pillar of Arab security, and that the UAE is keen to strengthen cooperation with it.  This is in direct contrast to the UAE’s former position backing the US attack on Syria utilizing terrorists following Radical Islam.

Assad also met with Dubai ruler Sheikh Mohammed bin Rashid al-Maktoum, and discussed the prospects for expanding the circle of bilateral cooperation, especially at the economic, investment and commercial levels.  Abu Dhabi become Syria’s most prominent global trade partner with non-oil trade estimated at $272 million for the first half of 2021.

A deal has been signed for UAE based-firms to build a 300-megawatt solar power plant near Damascus in mid-November.

The visit brought a condescending rebuke from the US, which said the State Department was “profoundly disappointed and troubled.” The Gulf nations used to be characterized as ‘puppets’ in the hands of Washington, but it now appears the ‘puppets’ have found their own voice.

UAE Foreign Minister Abdullah bin Zayed al-Nahyan visited Damascus in November after they reopened their embassy in Syria in late 2018.

Assad and the UAE leaders discussed Syria’s territorial integrity and the withdrawal of occupying foreign forces from the country, such as, Turkey and the US.

Much has been destroyed in Syria and reconstruction will cost tens of billions of dollars. The UAE are known for their building engineers and construction firms, and are poised to be a big part of rebuilding Syria.

With US-Saudi relations icy, Saudi Arabia’s crown prince, Mohammed bin Salman (MBS) has strengthened ties with Russia and China. He views Russia as a future arms supplier, and the one country which can exert pressure on Iran. Saudi Arabia signed a military cooperation agreement with Russian Defense Minister Sergei Shoigu at a trade fair in Moscow last August.

Riyadh wants closer ties with Beijing and has invited Chinese President Xi Jinping to visit this year. According to The Wall Street Journal, Saudi Arabia was in talks to price some crude it sells to China in yuan. Saudi Arabia is also pursuing joint ventures with China and others to produce weapons systems in the Kingdom.

On March 2, OPEC+ met with ministers avoiding the Ukraine conflict, and all agreed to adhere to the existing policy which includes Russia, and to only increase oil output gradually.

MBS has been steadfast in maintaining the OPEC+ agreement and stressed the importance of keeping the oil markets balanced and stable. This stance has angered the US who tried to pressure Saudi Arabia to pump more oil in response to sanctions on Russian oil.  Riyadh did not bow to US pressure, and instead threatened to sell oil to China in yuan, instead of the US dollar.

Saudi Arabia and the UAE are able to pump more oil, which would lower the price, but both have stood with the OPEC+ supply pact with Russia, and both have refused phone calls from US President Joe Biden recently.

The bad relationship between MBS and Biden is personal, and has a security aspect: the lack of a strong US response when Saudi’s Aramco oil facilities were attacked in 2019, and Washington’s announced desire to downgrade its military commitments in the Middle East. Riyadh was shaken with the Biden administration’s stated key goal of ending the war in Yemen, and the botched US withdrawal in Kabul.

MBS wants something from Biden: US support for the war in Yemen, help with the Saudi nuclear program, and legal immunity in the US against court actions by the likes of Saad al-Jabri, a former Saudi intelligence officer who alleged that the crown prince also tried to kill him.

The Biden administration has angered both Riyadh and Abu Dhabi by not heeding their concerns about Iran, ending US support for the war in Yemen and curtailing US weapons sales to the Gulf states.

Biden has refused to deal directly with MBS, and instead talks only with King Salman.  Biden ordered the release of a CIA report that directly implicated MBS in the 2018 murder of Jamal Khashoggi, and has described Saudi Arabia as a “pariah” state with “no redeeming social value.”

The US failed to defend Saudi Arabia from Iran’s 2019 attack on its central oil facilities, which temporarily knocked out 50% of the Kingdom’s production, and took no punitive action against Iran. During the Trump administration he regularly insulted King Salman for being kept in power by the might of the US, and characterized them as a cash cow to be milked by the US arms industry. Throughout Trump’s presidency, Saudi Arabia was deepening its relationship with Russia.

UAE abstained from a vote on a US-Albanian draft resolution condemning the invasion of Ukraine. Russian oligarchs, businessmen and youth are pouring into Abu Dhabi, which is rapidly replacing London as the international center of Russian money.

Bahrain appointed its first ambassador to Syria in over a decade, and Jordan fully reopened its central border crossing with Syria to boost trade in a display of diplomatic gestures that point to a shift underway in the Middle East where several Arab countries are reviving ties with Assad.

Last year, Jordan’s King Abdullah held a phone call with Assad, and despite being a US ally, the King has urged Washington to ease sanctions on Syria to increase trade. High level meetings between Lebanon and Syria occurred in a joint effort to revive the Arab Oil Pipeline to provide electricity to Lebanon through Syria.

Reviving Syrian-Arab relations hinge on Saudi Arabia. In November, Saudi and Syrian intelligence chiefs sat together in the Arab Intelligence Forum in Cairo, while earlier in May the Saudi had visited Damascus, the first meeting of its kind since 2011. Also in May, Syrian Minister of Tourism Rami Radwan Martini travelled to Saudi Arabia for a conference on tourism in the Middle East hosted in Riyadh, in the first public visit of any Syrian official to the kingdom in over a decade. Damascus is scheduled to host an Arab energy conference in 2024, and it appears Syria is slowly coming in from the cold.

Syria was suspended from the 22-member Arab League after the conflict began, when the US-EU-NATO and their Arab allies supported the armed opposition, which was later identified as Al Qaeda and ISIS. The Arab League will hold its first annual summit for three years in Algeria with the two-day summit starting on November 1.

The message coming out of the Arab world, and notably the six oil-rich countries of the Gulf, is to prepare for a new Middle East and the balance of power is shifting.  The Gulf nations host US and western troops and bases, and have backed Washington faithfully for decades, but are now in a pivot towards Russia and China. They have no intention of supporting Biden’s sanctions on Moscow.  The ‘puppets’ have awakened.