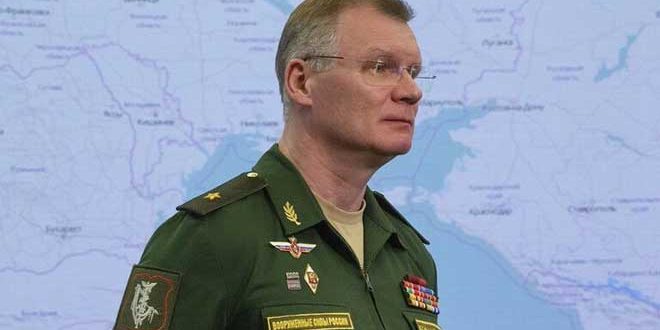 Moscow, SANA- Russian Defense Ministry announced on Wednesday that a weapons and ammunition depot in Ukraine’s Orgev was targeted with high-precision and long-range weapons from naval bases.

Konashenkov added that this depot contains weapons and military equipment, a large part of which the Ukrainian forces obtained from Western countries.

Konashenkov stated that Russian aircraft and helicopters targeted 97 Ukrainian military infrastructure facilities during the past 24 hours.

He noted that the operational and tactical aviation and Russian missile forces also destroyed two Tochka-U tactical missile system in the industrial zone and the northern suburbs of Kyiv, anti-aircraft missile systems, including 6 Buk-M1 systems, one S-300 and one OSA model, ten management centers and three military reconnaissance stations produced by NATO countries.

Yesterday, Russian military had shot down a Ukrainian Su-24 bomber and 16 drones, including three Turkish-made Bayraktar BT2 in the towns of Rozhin, Karashev and Maxim Gorky, Konashenkov added.

Konashenkov noted that since the start of the special operation in Ukraine, the Russian Armed Forces have destroyed 184 aircraft and helicopters, 246 drones, 189 Ukrainian anti-air defense systems, 1,558 tanks and other armored vehicles, 156 rocket launchers, 624 field guns and mortars, and 1,354 special military vehicles.