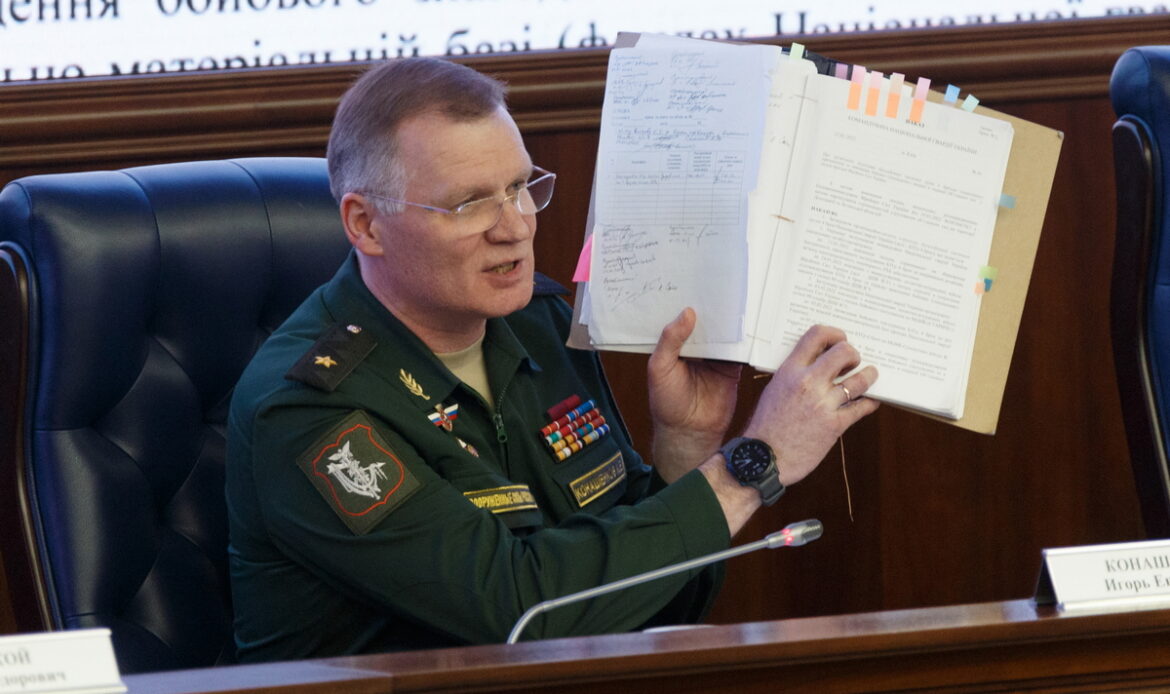 On March 25, the Russian Defence Ministry held a briefing in Moscow on the current results of the special military operation in Ukraine. Here are the main topics. You can read the full report HERE.

The special military operation is carried out strictly according to the approved plan. In general, the main objectives of the first phase of the operation have been achieved. The combat capabilities of Ukraine’s Armed Forces have been significantly reduced, which allows the Russian military to concentrate the main efforts on achieving the main goal – the liberation of Donbass.

With the beginning of a special military operation, air supremacy was won during the first two days. Russian troops blocked Kiev, Kharkov, Chernigov, Sumy and Nikolaev. Kherson and most of the Zaporozhye region are under full control. These actions are carried out with the aim of causing such damage to military infrastructure, equipment, personnel of the Armed Forces of Ukraine, the results of which allow not only to shackle their forces and do not give them the opportunity to strengthen their grouping in the Donbass, but also will not allow them to do so until the Russian army completely liberates the territories of the DPR and LPR.

Currently, the Ukrainian air forces and the air defence system have been almost completely destroyed. The naval forces of the country ceased to exist.

16 main military airfields were defeated. 39 storage bases and arsenals were destroyed, which contained up to 70% of all stocks of military equipment, materiel and fuel, as well as more than 1 million 54 thousand tons of ammunition.

Replacing losses is prevented by isolating the Ukrainian grouping of troops in Donbass, taking control of railway stations and key road routes with firepower. The supply of missiles and ammunition, fuel and food to Ukrainian forces has been almost completely halted. The field depots of missile and artillery weapons and ammunition, as well as fuel located directly in the area of the Joint Forces Operation are being hit.

At the moment, 30 key enterprises of the military-industrial complex have been hit by cruise missiles X-101, Kalibr, Iskander, and the Kinzhal aviation complex, which carried out repairs of 68% of weapons and equipment disabled during combat operations.

All 24 formations of the Land Forces that existed before the start of the operation suffered significant losses. Ukraine has no organized reserves left. At the time of the start of the special military operation, the Armed Forces of Ukraine, together with the National Guard, numbered 260 thousand 200 servicemen. During the month of hostilities, their losses amounted to about 30 thousand people, including more than 14 thousand – irretrievable and about 16 thousand – sanitary.

As of today, 1,351 Russian servicemen have been killed and 3,825 wounded. More than 23,000 foreigners from 37 countries have expressed their willingness to fight on the side of the people’s republics. We offered the leadership of the LPR and DPR to accept this assistance, but they said they would defend their land themselves.

The mainstay of the Kiev regime are nationalist formations such as Azov, Aidar, Right Sector and others recognized in Russia as terrorist organizations. In Mariupol alone, they include more than 7 thousand militants who are fighting under the guise of civilians, using them as a “human shield”.

The real purpose of such supplies is not to support Ukraine, but to drag it into a long-term military conflict “to the last Ukrainian.”

At the initiative of the Ukrainian leadership, the country has become a home to 6,595 foreign mercenaries and terrorists from 62 states. They are not subject to the rules of war and will be ruthlessly destroyed.

Today, the number of foreign mercenaries is declining. This was facilitated by high-precision strikes on their bases and training camps. On March 13, more than 200 militants were killed and more than 400 wounded in Starichi and at the Yavorovskii training ground alone.

Not a single foreign mercenary has arrived in Ukraine in the last seven days. Within a week, 285 fighters escaped into Poland, Hungary and Romania.

Significant territories of the Lugansk and Donetsk people’s republics have also been liberated. The people’s militia has taken control of 276 settlements that were previously under the control of the Ukrainian army and the national battalions.

At the beginning of the special military operation, the LPR and DPR people’s militias were confronted by a group of 59,300 people comprising the most combat-ready units of the Ukrainian Armed Forces, the National Guard and nationalist formations.

The absolute priority of the actions of the Russian Armed Forces during the operation is the exclusion of unnecessary civilian casualties.

Before the start of the offensive, the AFU units are invited to leave the combat area and move along with equipment and weapons to the point of permanent deployment. Not to resist when the offensive begins and those who lay down their arms are guaranteed safety.

A total of 5,043 tons of basic necessities, food packages, including baby food, vital medicines and hygiene products were delivered.

Since 4 March, the Russian Federation has been providing humanitarian corridors on a daily basis, exclusively for humanitarian purposes, in the directions of Kiev, Chernigov, Sumy, Kharkov and Mariupol, of which one humanitarian corridor to Russia and one more through Kiev-controlled territories towards Ukraine’s western borders.

In the face of tough opposition from the official authorities of Ukraine, since the beginning of the special military operation, 419,736 people, including 88,373 children, have been evacuated to Russia from dangerous areas of Ukraine, Donetsk and Lugansk people’s republics. 49,362 units of personal motor transport crossed the state border of the Russian Federation.

Without any participation of the Ukrainian side, nine thousand foreign citizens who applied for help were assisted in the evacuation.

The Ukrainian side has never confirmed a single humanitarian corridor towards the Russian Federation for the entire period.

This week alone, 17 attacks on civilians traveling along humanitarian corridors were recorded, including the cynical shelling of a convoy of refugees from Mariupol.

All Ukrainian prisoners in the Russian Federation are treated as required by the norms of international humanitarian law. At the same time, the Ukrainian authorities, against the general background of the lawlessness that reigns everywhere in Ukraine, grossly violate elementary humane norms, not to mention the requirements of the Geneva conventions, regarding the treatment of prisoners of war.

The rampant crime, looting and marauding and civilian deaths have been caused by the Ukrainian regime’s massive uncontrolled distribution of tens of thousands of small arms to the civilian population, including to criminals released from prisons.

The course of hostilities, the testimonies of civilians who left the blockaded settlements and captured Ukrainian servicemen show that today the AFU’s ability to resist is based on fear of reprisals by neo-Nazis. Their representatives are embedded in all military units.

The militants of the Azov battalion drive women and children out of the basements, threatening them with weapons, and send them towards the advancing units of the DPR in order to hinder the advance of the people’s militia. This has become a common practice for them.

The special military operation in Ukraine with its corresponding objectives and tasks was preceded by an eight-year period of a highly grave humanitarian disaster in Donbass that made more than 6.5 million persons to be victims of violations of human rights and caused deaths of more than 14.5 thousand persons. The almost daily shelling carried out by the Armed Forces of Ukraine and nationalist battalions caused 4,115 infrastructure buildings destroyed and 55,310 damaged, including residential buildings, educational establishments, hospitals and many other social facilities.

The secret cipher telegrams of the 4th brigade of the National Guard of Ukraine and classified documents captured by Russian servicemen revealed the plan for the preparation of the strike groups for offensive actions in the zone of the so-called “joint forces operation” in the Donbass. All measures of the nationalists’ combat coordination were ordered to be completed by February 28. In order to start performing combat missions as part of the Ukrainian “joint forces operation” in the Donbass in March 2022. Since February 2022, Ukrainian troops have multiplied artillery attacks on Donbass with prohibited large-caliber artillery weapons.