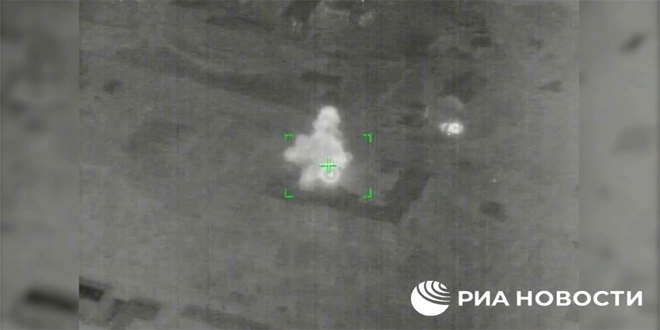 The Russian Ministry of Defense announced that the Russian Su-25 attack aircraft of the Russian Air Force succeeded in destroying ammunition and weapons depot of the Ukrainian Armed Forces during a mission last night.

The ministry released today a footage showing the destruction of Ukrainian military depots by a Russian Su-25 attack aircraft during a night bombing.

The footage showed the moment the bomber took off to carry out a night combat mission, then a recording from the plane’s aiming device showed the process of hitting the target with unguided missiles.

It also showed footage of the process of hitting a target by a drone, and the bomber was also shown attacking the target.

The ministry said that the crews of the Su-25 attack aircraft of the Russian Air Force destroyed ammunition and weapons depots of the Ukrainian Armed Forces, as ground targets were bombed with air missiles.