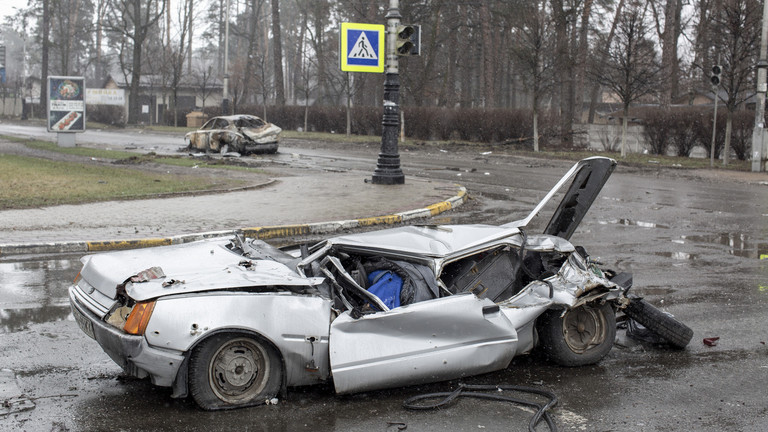 Ukrainian allegations against Russian troops should be properly investigated, not taken at face value, Moscow said

Ukrainian allegations that Russian troops were involved in war crimes in the city of Bucha near Kiev are not true, Kremlin spokesman Dmitry Peskov said on Monday. The claims need to be properly investigated and not taken at face value by foreign leaders, he suggested.

Information provided by the Ukrainian side “should be subject to serious skepticism,” the official said of the allegations made by Kiev. He claimed Russian military specialists found evidence of video manipulation and other forms of fabrication coming from Bucha.

“The facts and the timeline likewise speak against the veracity of the claims,” he added.

Bucha, a small city northwest of Ukraine, had been under the control of Russian troops since late February, when Moscow launched its military campaign against its neighbor. The Russian forces withdrew last week, after progress was made in Russia-Ukraine peace talks.

Days later, Ukrainian officials claimed that Russian troops were guilty of war crimes allegedly committed against civilians living in Bucha. They claimed some non-combatants were summarily executed before the withdrawal and otherwise deliberately targeted by Russian soldiers in what Foreign Minister Dmitry Kuleba described as “genocide.”

The Russian military denied the accusations on Sunday and said the evidence provided by Ukraine and by media outlets friendly to Kiev came days after the Russian troops withdrew. The city mayor failed to mention any atrocities as he celebrated the Russian pullout on March 31, the ministry pointed out.

Peskov said Moscow wanted to discuss the Bucha allegations at a UN Security Council meeting, but the call to hold one was stonewalled by the UK, which is currently presiding over the top international security body.

“The situation is undeniably serious. We call on certain world leaders not to rush with false accusations and get their information from various sources and at least hear out our arguments,” he said.

Moscow launched a large-scale offensive against Ukraine in late February, following Ukraine’s failure to implement the terms of the Minsk agreements signed in 2014, and Russia’s eventual recognition of the Donbass republics in Donetsk and Lugansk. The German- and French-brokered protocols had been designed to regularize the status of those regions within the Ukrainian state.

Russia has now demanded that Ukraine officially declare itself a neutral country that will never join the US-led NATO bloc. Kiev insists the Russian offensive was completely unprovoked and has denied claims it was planning to retake the two rebel regions by force.