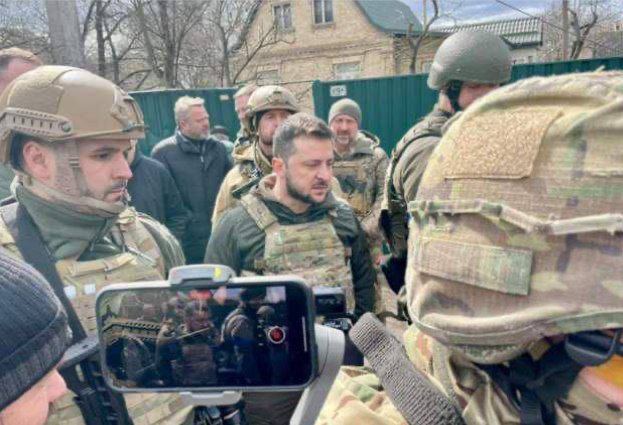 Information struggle around events in Bucha

In recent days, a great number of photos and videos have appeared concerning the mass murders in the city of Bucha. At the moment, there is an information war going on between Russia and Ukraine, where each side accuses the other of staging fake photos and videos. The terrible events in Bucha are only part of this huge information war.

At the moment, there are disputes about who carried out the massacre in Bucha, and did it take place. The positions of Russia and Ukraine differ greatly on this issue. In addition to the direct actors, third parties who adhere to Kiev’s official version are also commenting on the Bucha events.

Ukraine claims that the terrible footage published by the Ukrainian side on April 3 is a clear evidence to accuse the Russian military of torture and extrajudicial executions.

It is also necessary to cite several comments by Ukrainian President Volodymir Zelensky.

Kiev is yet to announce an examination of the bodies of those killed in Bucha.

The events in Bucha indicate the “mopping up” of Bucha by AFU troops before the Russian army arrived.

The National Police of Ukraine also “cleaned up” Bucha the day before the video of the dead on the streets appeared. The Russian side refers to the reports of the National Police of Ukraine on the official site, the special forces “began to clean up the city of Bucha” on April 2. After the completion of the “operation,” the agency published its video. The “cleansing” meant killing residents who collaborated with the Russian military, as well as saboteurs, who had been wanted in Ukraine since the first day of the special operation.

Moscow blames Kiev of multiple fakes. For example, the Russian side doubts the veracity of the photo from Bucha with bodies lying on the streets.

According to Russian representatives, “This episode is another vivid example of information warfare, when another fake story is presented to the global community.”

The Russian Defense Ministry said that Kiev’s information about the mass murders in the Ukrainian town of Bucha did not correspond to reality and that the footage was staged.

Because of this, Russia requested a UN Security Council meeting on Monday in connection with the provocation of Ukrainian radicals in Bucha.

– There are guys without blue armbands, can I shoot at them?
– Sure, f**k!

The covers of Western newspapers are replete with headlines such as “Nightmare in Bucha,” “Genocide,” and “Mass Murder of Innocents”. The essence of the publications boils down to one thesis: “Russia must answer for the shooting of civilians in the suburbs of Kiev.”

Biden said that Putin should be prosecuted for “war crimes” in Ukraine. The Russian ambassador to the United States, Anatoliy Antonov, stated that the fact that the Ukrainian Armed Forces had shelled the city of Bucha had been hushed up.

The Russian Foreign Ministry reported that Britain had not agreed to a UN Security Council meeting on Bucha. But the British Defense Ministry is going to “find new shootings” in territories previously abandoned by Russian troops, similar to Bucha. In particular, Jack Watling, an expert at the British defense and security think tank, said in an interview with the BBC that mass killings similar to those that occurred in Bucha near Kyiv could be found in other regions of Ukraine.

In the end, the true picture of events is quite difficult to reconstruct, because one side or the other is passing off its version as the truth. Civilians may also be divided into several camps, which at the moment provide them with protection.