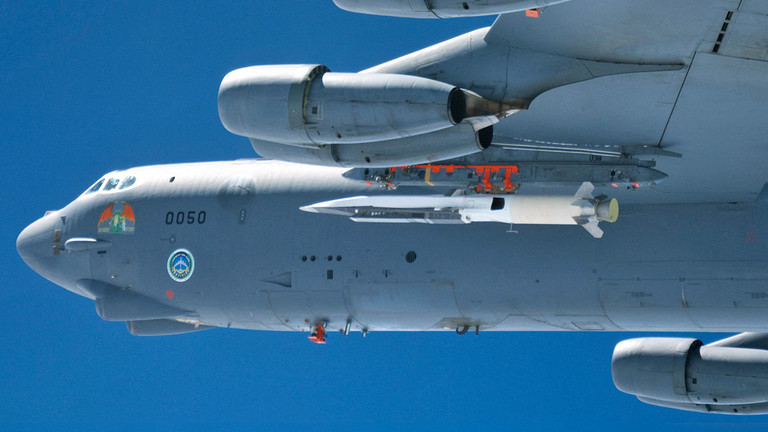 The move could provoke conflicts in other parts of the world, similar to the one in Ukraine, China has warned

Australia, UK and the US are going to expand their cooperation under the AUKUS trilateral pact to also include hypersonic technologies, the British government said in a statement on Tuesday.

China was quick to condemn the announcement, with Beijing’s UN envoy Zhang Jun warning that it could “lead the other parts of the world into a crisis” like the one currently underway in Ukraine.

Referring to the Western rejection of Russia’s military operation, Zhang had some advice for the US and its allies, quoting an old Chinese saying: “If you do not like it, do not impose it against the others.”

The leaders of Australia, the UK and the US have assessed the progress made under the AUKUS deal so far, saying that they were “pleased” with it, the UK government said.

It didn’t reveal any specific details, only stressing that Britain and America were “fully committed to establishing a robust approach to sharing naval propulsion technology with Australia that strengthens the global non-proliferation regime.”

But it turns out that the partnership won’t be limited to submarines only, as AUKUS members “committed today to commence new trilateral cooperation on hypersonics and counter-hypersonics… and to deepen cooperation on defense innovation,” according to the statement.

This will add to the already existing bilateral hypersonic program between the US and Australia called SCIFiRE (Southern Cross Integrated Flight Research Experiment).

Australian deputy prime minister Barnaby Joyce claimed that China’s hypersonic developments created an “existential threat” for Australia, insisting that “we have to make sure that we are right at the top of our game.”

Federal Treasurer Josh Frydenberg also welcomed the expansion of AUKUS cooperation but couldn’t say when exactly Canberra would be getting its hypersonic missiles. They would arrive “as soon as is practical,” he said.

The AUKUS pact, which is largely seen as a strategy to counter China’s growing influence in the Pacific, was announced by Canberra, London and Washington in September last year with the aim of arming Australia with a fleet of nuclear-powered submarines. Back then, Beijing denounced the deal, claiming that it was derailing peace in the region.

The US and its NATO allies are behind Russia and China when it comes to hypersonic weapons, which are believed to be beyond the reach of any air defense systems due to their extreme speed and high maneuverability.

Washington is only testing those technologies, with the latest launch as part of Hypersonic Air-breathing Weapon Concept (HAWC) program reportedly taking place mid-March.

Meanwhile, Russia has already used its air-launched Kinzhal hypersonic missiles to destroy targets during its ongoing military operation in Ukraine. US President Joe Biden reacted to the news by saying that hypersonic tech “doesn’t make… much of a difference except it’s nearly impossible to intercept.”

Kinzhal is just one of several hypersonic systems developed for the Russian military in recent years, together with the Avangard glider, which is fitted on silo-based ICBMs, and Zircon (Tsirkon) missiles, developed for the navy.

The Americans were also concerned by the Chinese hypersonic test in July 2021, with the head of the US Strategic Command, Admiral Charles Richard, saying in a testimony to Congress earlier this week that Beijing’s missile had traveled some 40,000 kilometers in just over 100 minutes, which became “the greatest distance and longest flight time of any land attack weapon system of any nation to date.”