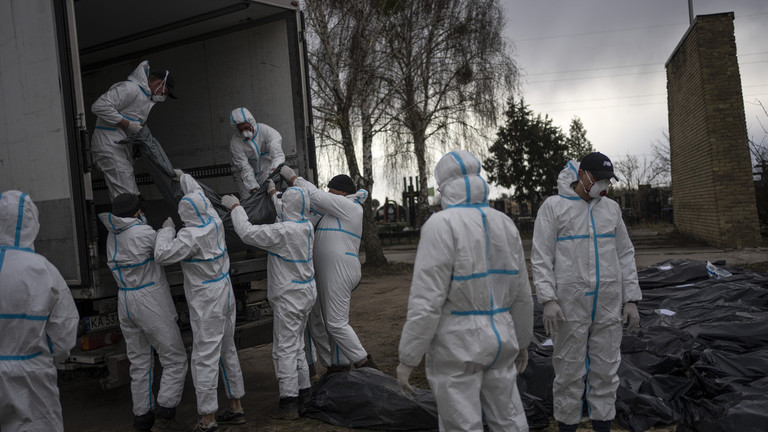 The purported massacre blamed on Russian troops is as “fake” as past “chemical attacks” in Syria, the president has said

Russian President Vladimir Putin has dismissed accusations that Russian troops are responsible for killing civilians in Kiev’s suburb of Bucha, labeling the case as fake. The president made the remarks during a joint press conference with his Belarusian counterpart Alexander Lukashenko on Tuesday.

“I’ve been talking to colleagues from Western countries, often, up until now. And when they say ‘Bucha’ to me, I ask them: ‘Have you ever been to Raqqa? Have you seen how this Syrian city was completely flattened by American aviation?’ Corpses have been laying there decomposing in ruins for months. And nobody cared about that,” Putin said, adding that mass-killings of civilians by the West in Afghanistan had been met with the same silence.

“There was no such silence when they staged provocations in Syria, when they imagined the use of chemical weapons by the Assad government. Then it turned out that it was a fake, the same fake is in Bucha.”

The Russian president also added that the country’s intelligence has already received materials proving that the Bucha mass killing, largely branded as a ‘massacre’, was staged, from their Belarusian counterparts. Putin, however, did not elaborate on the materials he mentioned.

Bucha made the headlines early in April shortly after the Russian military withdrew from the outskirts of Kiev and Ukrainian troops moved in and scores of dead civilians were discovered in the town. Kiev authorities promptly blamed the Russian military for the purported massacre, while top western politicians were quick to side with Ukraine and amplify its take on the incident. The suburb had already become a hotspot for European politicians to visit to show their solidarity with Ukraine, as well as to condemn “Russian war crimes.”

Moscow attacked the neighboring state in late February, following Ukraine’s failure to implement the terms of the Minsk agreements signed in 2014, and Russia’s eventual recognition of the Donbass republics of Donetsk and Lugansk. The German and French brokered Minsk Protocol was designed to give the breakaway regions special status within the Ukrainian state.