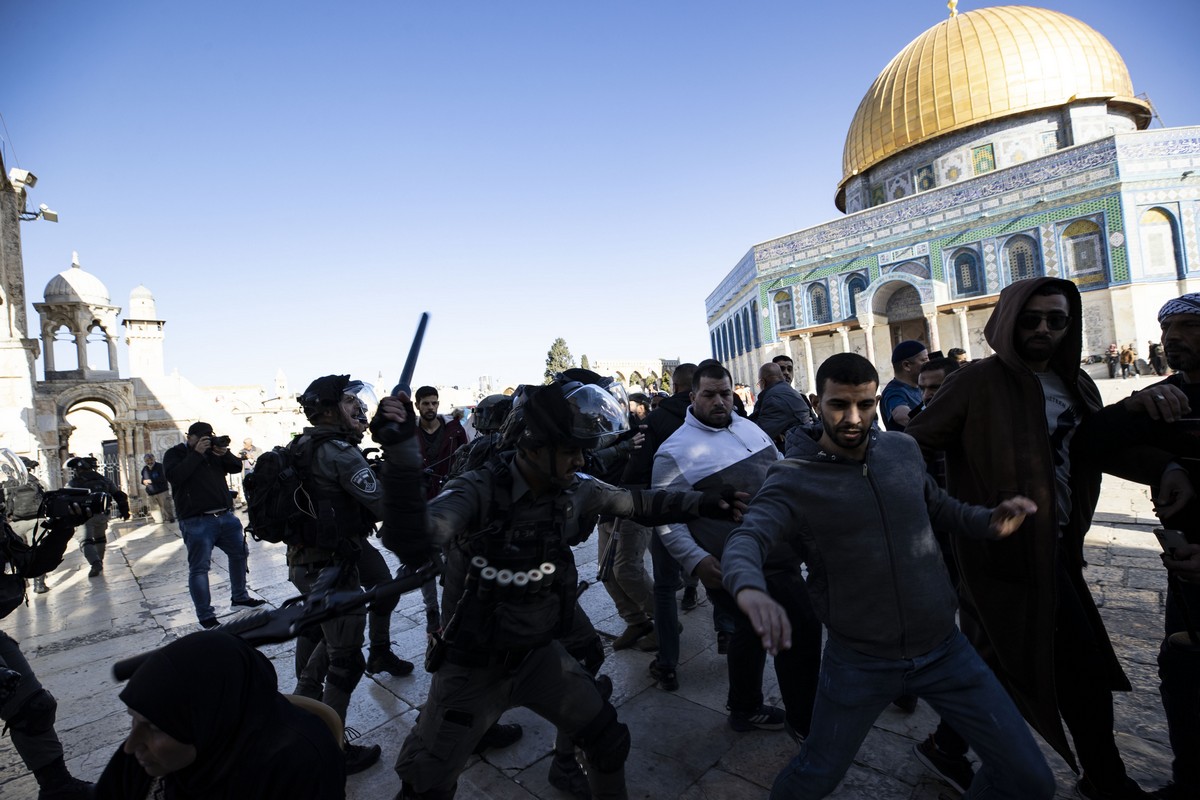 The Al-Aqsa Mosque compound was the scene of a brutal crackdown on Muslims trying to pray on Friday during the Holy month of Ramadan. Israeli occupation forces raided the mosque with weapons drawn while worshippers were on their knees praying.  Medics from the Red Crescent reported 158 Palestinians injured and treated at hospitals, while another 400 were arrested for attending prayers on Friday.  Israeli forces tried to prevent ambulances and paramedics from arriving.

Thousands had gathered for early morning prayers when the Israeli forces entered firing tear gas and stun grenades.  Videos online show one woman standing still and alone, while an Israeli officer ran to her without provocation and struck her severely on her legs with a metal rod, and she then screamed in pain as he ran on.

The worshippers were unarmed, while the Israeli forces were heavily armed and shot one man in the eye with a rubber bullet. This marks the most serious violence at the mosque compound in almost a year.

Rami al-Khatib, a cameraman at the scene, said, “They [Israeli forces] brutally emptied the compound. They were attacking the mosque staff, normal people, elders, and young people.” He added while suffering a broken hand, “There were many injured people; they fired rubber bullets inside Al-Aqsa Mosque compound. They were beating everyone, even the paramedics, they hit them.”

Jordan, Egypt، Russia and the Palestinian Authority all issued statements condemning the raids, and warning of an explosive situation which Israel has provoked.  Hundreds of demonstrators gathered outside the Israeli embassy in Jordan to show their solidarity with the Palestinians.

Omer Barlev, Israeli public security minister, claimed that Israel was committed to freedom of worship for Jews and Muslims alike.  The raid on the mosque seems to be in retaliation for a string of attacks inside Israel, with the latest one in Tel Aviv, that have sparked military raids in the illegally occupied West Bank with seven Palestinians killed since Wednesday.

Najwan al-Samri, a reporter with Al Jazeera, said the escalation came as extremist Jewish groups called for raids of the Al-Aqsa Mosque compound during the Jewish Passover holiday, with a threat to slaughter sacrificial animals on the courtyard which was an ancient Jewish practice. The fanatical Jewish settlers groups are betting on the “International Community” being indifferent to the Palestinians suffering amid the Ukraine crisis.

Ramadan, Passover, and Easter all coincide this month and all are connected to Jerusalem.  However, this latest violence, and the ongoing conflict since 1948, is not a religious war. The Israeli-Palestinian conflict is about land and human rights.  The Jews of Israel have property rights and human rights, but the Palestinians have neither.  The question is whether a modern democratic country like Israel should hold about five million people under brutal military occupation. Human rights groups have called Israel an Apartheid state, and experts have used the term genocide and ethnic cleansing to describe the Israeli policies against the Palestinian people.

Israel captured East Jerusalem, including the Old City, in the 1967 war and annexed it in a move not recognized internationally. Palestinians want the eastern part of the city to be the capital of a future state including the West Bank and Gaza, which Israel also captured during the war.

“It would not be responsible at this point in time to tell you how we would do it (destroying Al-Aqsa), but I will say it clear and loud, when I have the opportunity to do it, I will,” Hazan was quoted as saying in 2016.

The UN issued a statement, “The convergence of the holy occasions of Ramadan, Easter and Passover reminds us of how much we share in common. In this context, the High Representative calls on all parties demonstrate mutual respect and refrain from provocation in any form.

The High Representative also recalls the “UN Plan of Action to Safeguard Religious Sites: In Unity and Solidarity for Safe Worship” which advocates the sanctity of religious sites and stresses the right of all believers to access the holy sites and to practice their religious rituals and traditions freely, peacefully, and safely without fear or intimidation.”

In 2000, Ariel Sharon forcibly entered the Al-Aqsa Mosque compound. His provocation sparked the second intifada uprising which claimed about 6,000 lives.

Salman Abu Sitta is the founder and president of Palestine Land Society.  He sees the raids on the Al-Aqsa as a sign of the Israeli determination to occupy of all Palestine   Israeli fanatic extremism fuels the conflict, while Arab apathy doesn’t offer any defense of the third holiest site in Islam.

Zionism was a colonial project of European Jews, and was a secular movement which used religion later to recruit supporters.  The plan was to acquire land and bring Jews to colonize it with the goal to takeover Palestine.  Israel continues to be a settlers’ regime wanting to ensure full control over all on Palestine, and all religious sites, both Christian and Muslim. Israel and the former South African apartheid regime have been compared.

The UN resolution 194 states that “the holy places, religious buildings, and sites in Palestine should be protected and free access to them assured, in accordance with existing rights and historical practice.” The 1954 Hague Convention for the Protection of Cultural Property in the Event of Armed Conflict prohibits Israel from destroying the Al-Aqsa mosque, and any acts of violence against it.

Palestinian resistance will continue to rise, as the young people who have never known freedom are hungry for the same human rights enjoyed by the Israeli citizens who occupy Palestine.  A political, territorial and colonial struggle has a solution; decolonization and the restoration of the rights of the colonized people. This was a successful struggle in South Africa.

“The Israeli government should work to restrain Jewish extremists before they drag the whole region into more conflict and more violence,” said Pastor Noam, Dean of St George the Martyr Cathedral in Jerusalem.

He said, “We as Palestinian Christians have always stood with our Muslim brothers and sisters in defense of our city and our holy places. We condemn any act of vandalism against holy sites of all Abrahamic faiths. We value the role of the Hashemite Kingdom of Jordan as custodian of these holy sites.  We always pray for the peace of Jerusalem.”

Eastern Orthodox Easter is on Sunday April 24. The church bells of Jerusalem will be ringing as the call to prayer is heard from Al-Aqsa Mosque compound.