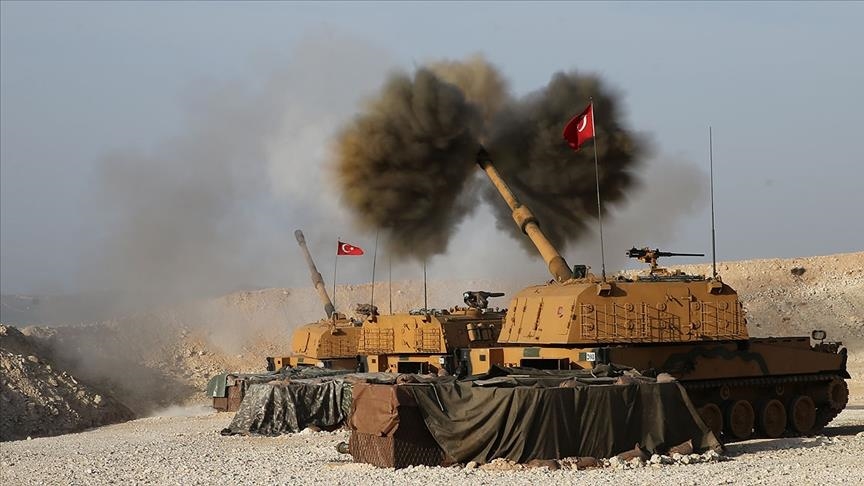 While the world is focused on the Ukrainian conflict, Turkish jets, helicopters, and drones were pounding Kurdish targets in Iraq and Syria on Monday. Targets were camps, ammunition warehouses, and civilian homes caught in the cross-fire.

In the northeast of Syria, in the countryside of Hasaka, the villages of Abu Rasin, Tal Tamer, al-Mabqir, Qabour al-Gharajneh, and Tel Shanan, Tal al-Ward, Rabi’at, Dada Abdul, al-Nuwaihat, al-Assadiya, Khadrawi, and Mushairfa were attacked with intensive artillery and airstrikes.

The Turkish Army, along with the Radical Islamic terrorist mercenaries they employ, caused massive destruction of many houses and properties, which caused panicked survivors to flee the area for Hasaka.  The number of dead and injured has yet to be reported.

The violence and bloodshed are caused by Turkey’s occupation of the Syrian land, which is inhabited by a Syrian ethnic majority, but under the brutal military control of a minority group.  The Kurdish separatist army SDF and YPG are aligned with the terrorist group PKK, who are Kurdish communists. To add to the confusion and competing interests, the SDF and YPG are paid mercenaries for the United States government.

The Syrian government can’t attack the SDF and YPG because they are supported by the US, who has troops stationed in the area, preventing the Syrian oil wells from being used by the Syrian people for their domestic gasoline supply.  Currently, there is a severe gasoline shortage in Syria caused by the US forces occupying the oil wells.

Turkey has suffered decades of terrorism carried out by the PKK, which has cost 40,000 lives, and the group has been designated a terrorist organization by the US and the European Union.  When the US built up the SDF and YPG in northeast Syria, Turkey invaded to prevent the Kurds from forming a ‘homeland’ there, which the Kurds call Rojava, and is under a socialist administration, while enjoying American support, both militarily and economically. Even though Turkey and the US are both NATO partners, there is a long-standing dispute between them over the US military support of a designated terrorist group.

The Turkish invasion of Iraq

The Turkish military operation, “Operation Claw Lock”, is part of long-running Turkish operations in Iraq and Syria against militants of the PKK and Syrian Kurdish militias, which Ankara regards as terrorist groups.  Jets and artillery in Iraq struck shelters, bunkers, caves, tunnels, ammunition depots, and headquarters belonging to the PKK. Turkish commandos crossed into Iraq by land or were flown in by helicopters.

The Turkish invasion of Syria

Turkey entered Syria in August 2016 with thousands of Turkish troops and terrorists from the Free Syrian Army, backed by armed drones and artillery. In October 2019, Turkey conducted the ‘Operation Peace Spring’ in northeast Syria. The terrorists that Turkey employs as mercenaries regularly attack Syrian villages while fighting the Kurds and terrorize the local population.

The US-supported SDF and YPG forces have besieged two northeast cities in Syria, Qamishli, and Hasaka. The YPG said it took over about 10 government offices ranging from the local finance, grains, and education branches in a zone in the heart of the city of Qamishli while preventing for a sixth consecutive day the entry of wheat and fuel to the city of Hasaka.

“The SDF are preventing entry of wheat, foodstuffs, and fuel that are needed to run bakeries and this is adding to the hardship of people in these difficult times,” said Ghassan Khalil, the governor of Hassakeh, and Damascus has accused the YPG of starving people.

The Russian mediator in Syria warned the Kurdish forces that Turkey would carry out an attack on al-Darbasiyah and Amoud to reach Qamishli if they don’t stop the siege on Qamishli and Hasaka.

EU trying to re-brand the PKK

The Secretary-General of the EU Turkey Civic Commission, Michael M. Gunter, has called for the removal of the PKK from a list of terrorist organizations.

“Delisting the PKK would not only help renew the peace negotiations between Turkey and the PKK, but also brighten (the Syrian Kurdish region of) Rojava’s long-term prospects, and help relieve the NATO crisis between the United States and Turkey fuelled by their clashing interests in Syria,” Gunter wrote.

The EU, under direction from Washington, is trying to re-brand the PKK for the US support for the Kurds in Syria to be justified.  However, according to experts in Turkey, President Erdogan will never accept the transformation of the PKK into a political entity to be negotiated with, regardless of his ties with Washington.

Turkey has been arresting Syrian refugees and deporting them to Syria. Turkey has about 3.7 million Syrian refugees, and many Turks have blamed the refugees for crimes, rising prices, unemployment, and the breakdown in the economy which saw the Turkish currency lose value.

Recently, Hamza al-Hamami, a Syrian refugee who runs a shop in Istanbul, was ordered to be deported following his arrest in connection to a dispute with Turkish men. This is the latest case in a long list of deportations of Syrians. Syrians are from the Arab race, and Turks are not. Racial discrimination is at the heart of the violence and deportations, which use an economic excuse to justify actions.

According to Turkish media, Hurriyet, Turkey, and Syria are in discussions on repairing the broken relationship between the two neighbors. Ankara insists it is committed to preserving the unity of Syria, which translates into preventing any Kurdish ‘homeland’ from being established, and the safe return of Syrian refugees.

Damascus and Ankara had been the closest neighbors and shared a great deal of cross-border trade and investment.  Tourism between the two countries was at an all-time high before the start of the US-NATO attack on Syria for ‘regime change’.  Free trade and visa-free travel were agreed to just before March 2011 when the Syrian war began in Deraa.

President Assad visited the UAE last month, and this has encouraged Turkey to begin repairing its relations with Syria. Some Arab countries have already re-established their relations with Damascus, and the upcoming Arab League meeting scheduled for November may see Syria’s seat at the table once again filled.