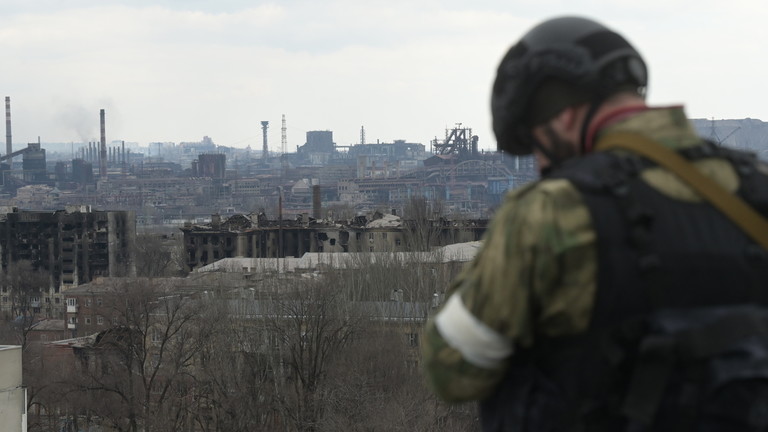 Kiev is betraying its own fighters by not giving the order to lay down arms, Moscow says

Russia’s Defense Ministry has extended the offer to surrender for the remaining Ukrainian forces holed up at the Azovstal steel plant in the Black Sea port city of Mariupol after they refused to leave through a humanitarian corridor on Tuesday.

Those present at the location may still exit the facility from 14:00 Moscow time on Wednesday without any arms or ammunition on them, officials said in a statement late on Tuesday.

“The Russian leadership guarantees the preservation of life, complete safety and provision of qualified medical assistance to all those who lay down their arms,” it said.

The country has proven its humane attitude towards surrendering Ukrainian troops on numerous occasions during the conflict and this time the term of the Geneva Convention on POWs will also be fulfilled, the ministry insisted.

To be able to leave the steel plant, the Ukrainian commanders inside were told to establish uninterrupted radio contact with the Russian forces, cease all hostilities and raise white flags along the perimeter of Azovstal.

The offer to lay down arms given to “militants of nationalist battalions and foreign mercenaries” is being repeated despite “the absence of any elementary steps from the Kiev authorities aimed at saving their country’s servicemen,” the statement read.

Members of the notorious Azov battalion were already given a chance to surrender on Sunday and Tuesday but didn’t take up the offer on both occasions.

Intercepted communications from Azovstal, suggest that the Ukrainian commanders “realize the hopelessness of their situation and are ready to lay down their arms, but only on the appropriate command (order) from Kiev,” which Ukrainian authorities are refusing to give, the ministry insisted. Surrendering without government approval may see them court martialed, with sentences of capital punishment possible, it added.

Moscow described such actions by Kiev as a “betrayal of the Ukrainian servicemen and members of nationalist battalions,” and again urged it to “show common sense, give appropriate instructions to the fighters to stop senseless resistance and exit through humanitarian corridors.”

If such an order isn’t made by the Ukrainian leadership once again, the commanders or ordinary servicemen should themselves make the decision to lay down their arms to survive, it added.

The strategic city of Mariupol has seen the heaviest fighting during the ongoing conflict between Russia and Ukraine, suffering immense destruction. It’s now almost entirely controlled by Russian forces, with Azovstal remaining the last pocket of Ukrainian resistance.

Those holed up at the steel plant, with its massive network of underground tunnels, have been running short of water and food, the Defense Ministry had said earlier, based on intercepted communications.

According to Russia’s estimates, Ukraine’s losses in Mariupol have reached some 4,000 combatants, including nationalist fighters of the notorious Azov and Aidar regiments, and “foreign mercenaries.”