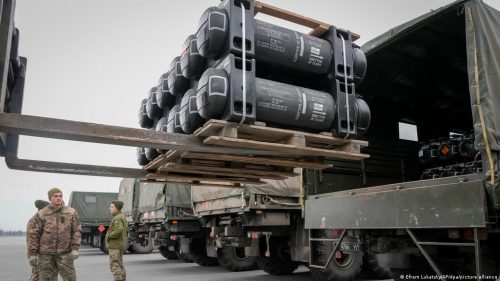 On April 19, Reuters reported a series of questions to the White House asking about an increase in artillery supplies to Ukraine, with U.S. President Joe Biden stating that the U.S. was going to increase supplies. In turn, White House spokeswoman, Psaki,  tated that: “we will continue to supply more ammunition to Ukraine, along with increased arms shipments.”

The White House will announce a new “big package” of military aid to Ukraine these days. Officials said the size of the package will be similar to the $800 million announced by Biden’s office last week. They also specified that the new aid would include more artillery and tens of thousands more shells, which will likely be “crucial” to a new phase of the war in the Donbas. Officials confirmed that Biden has not signed the new package. But when asked if he would send more artillery to Ukraine, he replied in the affirmative.

Ukraine received fighter jets and spare parts from US allies. John Kirby clarified that the U.S. helped with the delivery of additional spare parts, but did not transport the “whole” aircraft.  He did not say which country/countries provided the aircraft. As Russia launches a new offensive in the Donbas, the U.S. will be training Ukrainians in the use of artillery systems “very, very soon.” A limited number of Ukrainian instructors will learn how to operate them and then train their colleagues. The system and its ammunition will also be moved from the U.S. to Ukraine “very, very soon,” he said.

The command of the air force of the UAF denied the Pentagon’s statement that Ukraine had received fighter jets from US allies. “Ukraine did not receive new aircraft from partners, but only received spare parts and components for the restoration and repair of the fleet of aircraft that are in service with the Ukrainian aviation,” the command says.

On April 20, the U.S. is going to send seven more warplanes to Eastern Europe with military aid for Ukraine.

Meanwhile, Ukraine continues its European integration. Matti Maasikas, the EU ambassador to Ukraine, published photos showing Ukrainian President Vladimir Zelensky handing over the completed questionnaire required for EU accession. The document will be handed over to the European Commission, which will assess Ukraine’s readiness to join the EU and give its recommendations to the European Council by mid-summer.