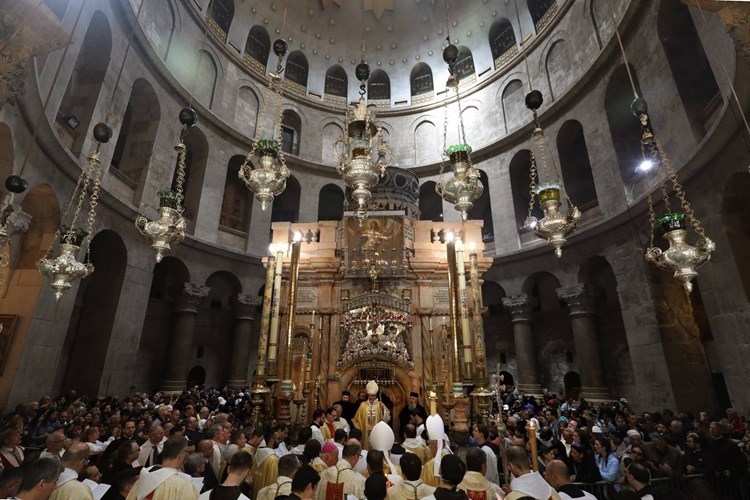 Despite strict Israeli restrictions, thousands celebrated the outpouring of the Holy Fire inside the Church of the Holy Sepulchre.

Al Mayadeen correspondent in occupied Al-Quds reported today that the occupation forces prevented Christians from freely reaching the Church of the Holy Sepulchre, adding that one of the priests was attacked by the IOF while on his way to the church.

The correspondent added that the occupation forces were heavily deployed in Al-Quds and imposed restrictions on Christians heading to the church.

Earlier, the occupation forces closed the New Gate leading to the Old City of occupied Al-Quds, through which the pilgrims enter to celebrate the Holy Saturday.

Despite strict Israeli restrictions, thousands celebrated the outpouring of the Holy Fire inside the Church of the Holy Sepulchre.

The Greek Orthodox Archbishop of Sebastia in Al-Quds, Archbishop Atallah Hanna, told Al Mayadeen that the occupation forces entered the Church of the Holy Sepulchre with their weapons

The Archbishop revealed that the occupation turned the Old City into a military barracks, explaining that the occupation forces are blatantly encroaching on the sanctity of the Church of the Holy Sepulchre in an unprecedented targeting of the Christian presence in the city.

Hanna stressed that “the occupation is sabotaging our holidays and religious occasions, and this is a crime committed in broad daylight against all Christians.”

Yesterday, representatives of the Christian community in occupied Al-Quds warned against the threat of an Israeli decision to impose restrictions on Christian worshipers entering the Church of the Holy Sepulchre, according to the “Israel Hayom” newspaper.