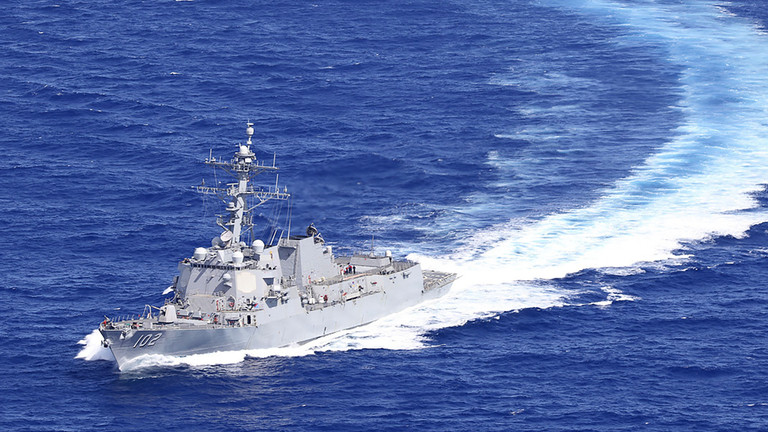 The Chinese military on Wednesday condemned the latest US patrol mission in the Taiwan Strait, calling the arrival of the warship a “provocation.”

The USS Sampson guided-missile destroyer sailed through the strait on Tuesday and, according to a statement by the People’s Liberation Army’s Eastern Theater Command, was “tracked and monitored” by Chinese vessels along its entire route.

“The US frequently carries out such provocative actions, sending wrong signals to ‘Taiwan independence’ forces, and deliberately undermining the peace and stability of the Taiwan Strait,” the statement read, adding that the Chinese military “firmly opposes” such moves.

The US 7th Fleet spokesperson, Nicholas Lingo, said earlier that the USS Sampson’s mission “demonstrates the US commitment to a free and open Indo-Pacific.”

Despite China’s objections, the US sends warships to patrol the area once a month as part of freedom of navigation exercises. Washington regards the Taiwan Strait as international waters, claiming that it has the legal right to operate there without limitations.

Beijing considers Taiwan to be a breakaway territory under its One-China policy. The island of 23.5 million has been self-governed since 1949, but never formally declared independence from China.

Despite recognizing Beijing as the sole legitimate authority in China since 1979, the US has maintained strong unofficial ties with Taipei, backing its push for sovereignty and supplying arms to the island.

On Tuesday, US Secretary of State Antony Blinken announced that Washington had made or facilitated nearly $20 billion in arms sales and $2.5 billion in direct commercial sales to Taiwan since 2017.

He reiterated that the White House was “determined to make sure that it [Taiwan] has all necessary means to defend itself against any potential aggression, including unilateral action by China to disrupt the status quo that’s been in place for many decades.”

Tensions between the US and China have further deteriorated since the start of Russia’s military operation in Ukraine in late February. Washington has been unable to pressure Beijing to condemn Moscow and join international sanctions.

China has called for peace, but blamed the outbreak of the conflict on the continuing US push for to expand NATO close to the Russian border.