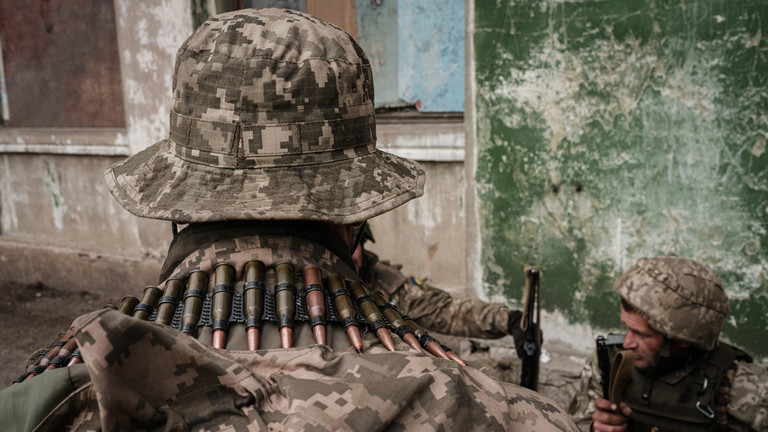 Foreign fighters are joining the Ukrainian military in search of “adventure,” the commander of Kiev’s 36th Naval Infantry Brigade has told RT. He was captured by Russian forces during fighting in Mariupol.

Colonel Vladimir Baranyuk said there were foreigners in the ranks of his unit, explaining that Ukrainian legislation allows citizens from other countries to join its armed forces. “They sign official contracts and serve,” he said.

Baranyuk recalled at least two foreign troops – “both from Great Britain” – being under his command.

“One was called Aiden… I can’t remember the other one’s name… a really short last name,” he said.

The commander could be referring to British nationals Aiden Aslin and Shaun Pinner, who were captured in the city of Mariupol in April. Aslin and Pinner, who are believed to be mercenaries, are accused of crimes against civilians by the People’s Republic of Donetsk.

UK Prime Minister Boris Johnson promised in late April to “do what we can” to free the duo through a prisoner swap. However, the PM pointed out that it was up to Ukraine to make the final decision on the matter. Aslin and Pinner “were not hostages and they are not to be swapped as though they are terrorists – they are prisoners of war,” he added.

According to Baranyuk, foreigners began to arrive in Ukraine with the aim of enlisting in its military prior to 2018.

“When I assumed command of the brigade, I tried asking them [why]. They said they wanted, well, to serve, so to speak. To be honest, I was surprised by their reasoning,” he recalled.

“I asked them ‘Why? What’s the point? Can’t you make money elsewhere?’ They said ‘No, it’s not like that. We’re adventure-seekers,’” the commander revealed.

There was nothing special about the foreign troops, who all held “ordinary positions” in the unit, he insisted. “I can’t say they did anything extraordinary; that they were any different, say, from our marines.”

During his interview, Baranyuk also slammed the Western weaponry provided to Kiev by the US and its allies. He described the American Javelin anti-tank systems as “useful, especially in urban warfare,” and revealed that the battery of its British counterpart NLAW drained too quickly in cold weather, making the weapon impossible to use.

Russia’s Defense Ministry said last month that an estimated 6,824 foreign mercenaries from 63 countries had come to Ukraine, responding to a call by President Volodymyr Zelensky. Of these, 1,035 had been “eliminated,” while more than 900 have fled the country, Russia said.

Earlier this week, a Canadian mercenary known as ‘Wali’, who had been hailed as “the best sniper in the world” by the Western media, gave an interview in which he described his Ukrainian experience as a “terrible disappointment.” He said he decided to return to Quebec because of inadequate weaponry, poor training and heavy losses among the Kiev troops, as well as looting and desertion in their ranks.

Baranyuk and his marines had been assigned the mission of securing the northern outskirts of Mariupol, a strategic port city in the southeast of Ukraine, from the advancing Russian forces, but failed to fulfill it.

The commander was captured during a botched attempt to flee the city, which he claims he undertook together with several loyal men after realizing that Kiev’s promises to send help to his encircled troops were lies.

Mariupol has been the scene of the most intense fighting during the ongoing conflict between Russia and Ukraine, suffering immense destruction. The city is now almost entirely controlled by Russian forces, with the Azovstal steel plant – where Ukrainian servicemen and nationalist fighters of the notorious Azov Battalion are holed up – remaining the last pocket of resistance.

Russia attacked its neighboring state following Ukraine’s failure to implement the terms of the Minsk agreements, signed in 2014, and Moscow’s eventual recognition of the Donbass republics of Donetsk and Lugansk. The German- and French-brokered Minsk Protocol was designed to give the breakaway regions special status within the Ukrainian state.
The Kremlin has since demanded that Ukraine officially declare itself a neutral country that will never join NATO. Kiev insists the Russian offensive was completely unprovoked and has denied claims it was planning to retake the two republics by force.