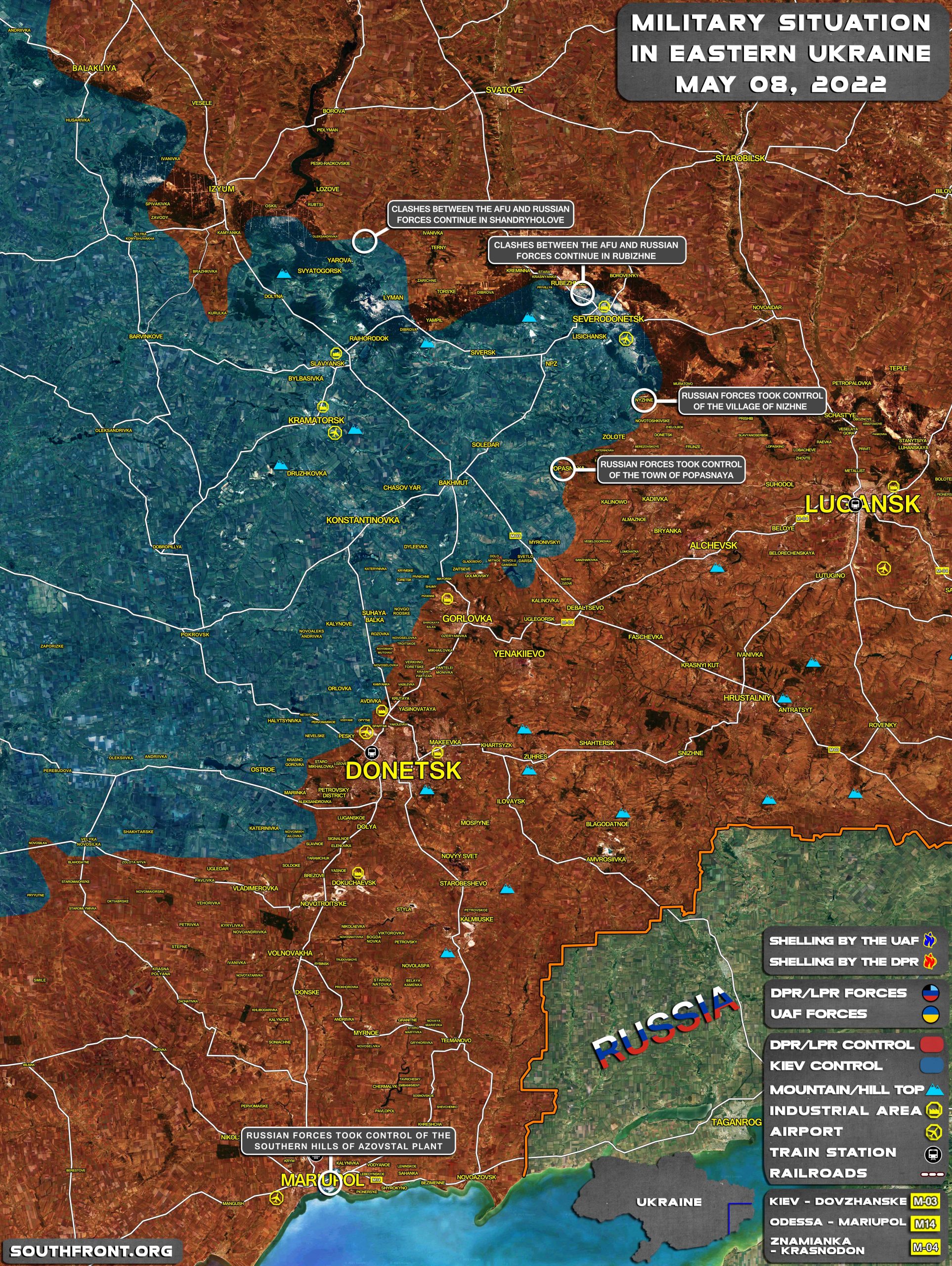 Russian-led forces have recently claimed several victories in the region of Severodonetsk-Lisichansk in the Luhansk People’s Republic.

After weeks-long battles in Rubezhnoe, the Luhansk People’s Militia claimed the control over the town and nearby areas. After the town of Rubezhnoye came under the LPR control, Russian forces advanced closer to the city of Severodonetsk.

The LPR military showed an apartment used as a firing point by Ukrainian soldiers in Rubezhnoe. A lot of NATO weapons were left inside:

Despite several attempts by the AFU to counterattack, the village of Voevodovka located between Rubezhnoe and Severodonetsk was completely mopped up of Ukrainian forces.

The LPR fighters knocked out Ukrainian forces from the territory of the former children’s camp which was used as the AFU stronghold in the suburbs of Severodonetsk.

On May 9, local sources reported that the allied forces broke through the AFU defense in the area of Belogorovka, forcing the Seversky Donets River.

More victories of Russian-led forces were reported on the southern LPR front lines.

Russian-led forces moped up and took full control of the town of Popasnaya following fierce clashes with the AFU. The town is of strategic importance for the Armed Forces of the Russian Federation and their allies.Popasnaya is located on a hill, which is 100 meters higher than Lisichansk from the north and Svetlodarsk from the south, as well as Artemovsk in the western direction by more than 170 meters. Control over the city allows Russian-led forces to control a vast area in all directions for more than 30 km.

The Russian Su-25 passes over Popasna, strikes at the AFU stronghold south of the town:

The control of Popasnaya allows Russian-led forces to take control over a major transport hub in the city of Artemovsk.

The loss of Belogorovka, coupled with the departure from Popasnaya, pose the threat to the AFU military supplies to Severodonetk-Lisichansk along the Soledar-Lisichansk road.

At the same time, the units of the LPR People’s Militia claimed control over the village of Nizhny, heading towards the town of Toshkovka to  reach another road leading to Lisichansk.

The recent gains pawed the way for Russian assault to Lisichansk from the south. Up to 8 thousand Ukrainian servicemen deployed in Severodonetsk and Lisichansk, risk to be encircled in the coming weeks. The LPR ambassador to Russia reported that a whole brigade of the Armed Forces of Ukraine had recently withdrawn from Lisichansk, leaving their positions after some clashes.

The shelling of the cities of Severodonetsk and Lisichansk continues, but no massive assault of the cities have been reported so far.