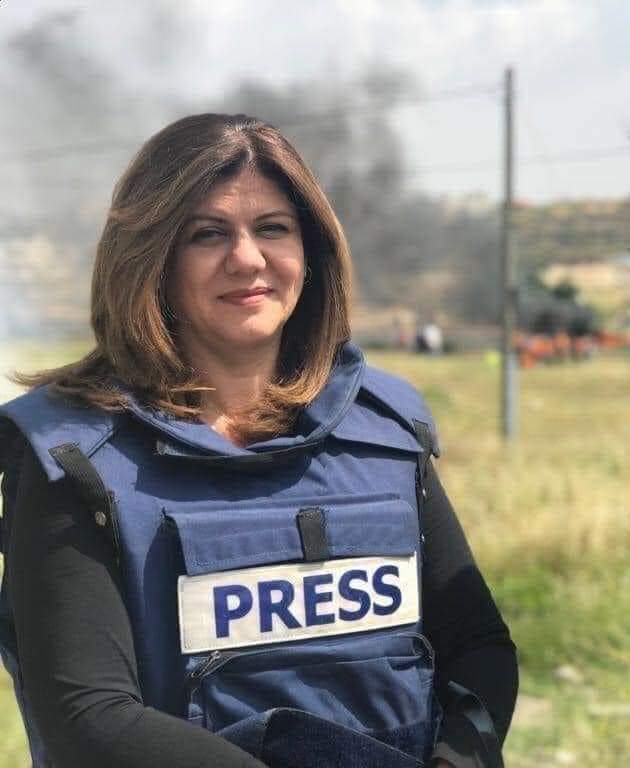 An American journalist, born in Jerusalem, was killed in Jenin in the Occupied West Bank of Palestine by Israeli Defense Forces on Wednesday.  Shireen Abu Akleh had worked as a reporter for the Arabic-language channel of Al Jazeera for 25 years, and was covering an Israeli raid into Jenin when she was deliberately targeted and killed by an Israeli soldier.

Ali al-Samoudi, of Al-Quds newspaper, was shot in the back, and two other Palestinians were injured and transported to a hospital.  Al Samoudi, and all other journalists present reported there were no Palestinian fighters present when the Israeli Defense Forces opened fire on the group of journalists.

“Suddenly they shot us without asking us to leave or stop filming,” said al-Samoudi. He added, “The first bullet hit me and the second bullet hit Shireen … there was no Palestinian military resistance at all at the scene.”

Shatha Hanaysha, a local journalist who was standing next to Abu Akleh said, “We were four journalists, we were all wearing vests, all wearing helmets,” Hanaysha said. “The [Israeli] occupation army did not stop firing even after she collapsed. I couldn’t even extend my arm to pull her because of the shots being fired. The army was adamant on shooting to kill.”

Walid Al-Omari, Ramallah bureau chief for Al Jazeera, said that Abu Akleh was wearing a blue flak jacket marked “PRESS”, and a helmet, but was shot in an unprotected area under her ear, which points to a deliberately targeted shot. The video of the shooting substantiates what Al-Omari described.

Ibrahim Melham, Palestinian Authority government spokesperson said, “However, all the witnesses present at the scene of the crime ensures that it was an Israeli sniper that committed the crime in a deliberate way.”

Abu Akleh’s father was from Bethlehem, the birth place of Jesus Christ, and her family were Palestinian Christians, descendants of the followers of Jesus.  Bethlehem is a Christian village dating over 2,000 years, and is the birthplace of Christianity.  Palestinian Christians had been about 20% of the population of Palestine in 1948, but now number only 2% of the Palestinian occupied territory. Only Jews can be Israeli citizens, and human rights groups have labeled Israel as an Apartheid state, as well as a racist state.

Christians in Palestine have been diminished over the 74 years of brutal military occupation. American and European Christians, and their churches, have mostly turned a blind-eye to the crimes and atrocities carried out by the Israeli government.

Abu Akleh wrote last year about the importance of Jenin. “It is the city that can raise my morale and help me fly. It embodies the Palestinian spirit.”

Jenin has the potential to be the beginning point of a raging wildfire, which the Israeli government is deadly afraid of, and wishes to stomp-out before it spreads to the rest of the Occupied West Bank. This has caused the Israeli Defense Forces to intensify its raid on Jenin recently.

Jamal Haweel explained, “Jenin has a legacy of hundreds of years in resistance that has been passed on from one generation to the next.” He added, “Resistance in the city has become our lifestyle, our culture, our life,” stressing that all Israeli and American attempts to change the city’s identity since 2002 have failed.

“The [Israeli] occupation forces’ daily attacks and attempts to turn the West Bank into a settlement is the main reason for the resistance in Jenin,” said Haweel, while noting that Israel fears Jenin would become an inspiration to resistance cells in other cities in the West Bank.

Stanley L. Cohen is an attorney and human rights activist who has done extensive work in the Middle East, and he wrote, “Long ago, it was settled that resistance and even armed struggle against a colonial occupation force is not just recognized under international law but specifically endorsed.  In accordance with international humanitarian law, wars of national liberation have been expressly embraced, through the adoption of Additional Protocol I to the Geneva Conventions of 1949 (pdf), as a protected and essential right of occupied people everywhere.”

Abu Akleh is just the latest American to be killed by Israeli violence and aggression. Rachel Corrie was a 23-year-old American peace activist from Olympia, Washington, who was crushed to death by an Israeli bulldozer on 16 March 2003, while undertaking nonviolent direct action to protect the home of a Palestinian family from demolition.

The US government has never taken a stand against Israel in the killing of any American citizen.  The White House, like the US churches, turn a blind-eye at crimes and atrocities committed by their staunch ally.  Israel is routinely described as the “only democracy in the Middle East”; however, keeping five million Palestinians under a brutal military occupation for 74 years cannot be described as a democracy.

The administration of President Joe Biden is busy with other worries, and has not hinted at any US push for peace in the Middle East, which is kept in chaos and turmoil because the Palestinian people are not free.  The only solution for peace and stability for Israelis and Palestinians is to recognize the human rights of the Palestinian people and set them free in their own land.  Until then, the resistance to occupation will continue to grow and is a legally justified response.

I dedicate this article to the memory of Shireen Abu Akleh, and all the other journalist who have been killed while reporting the truth.