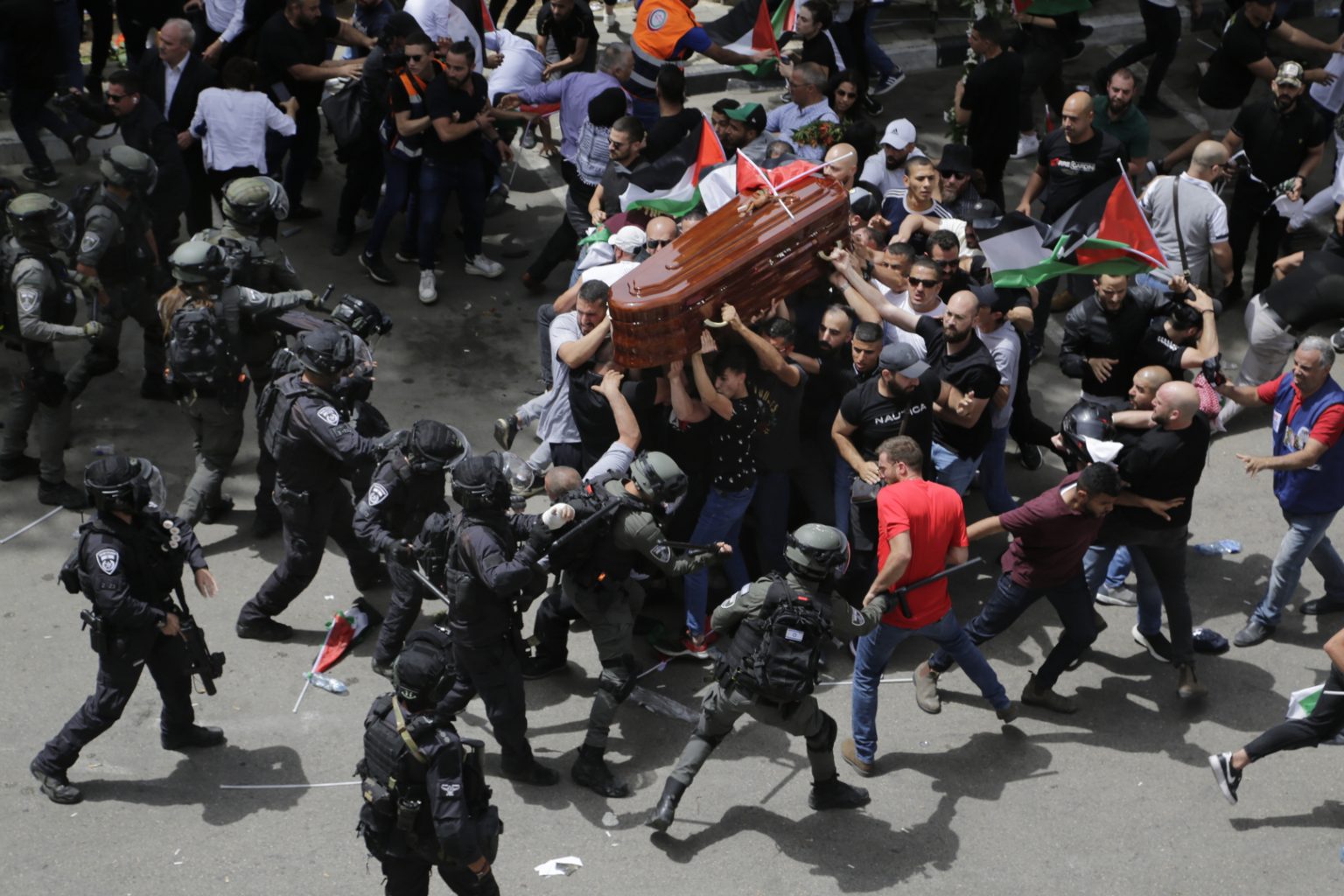 The funeral of American journalist Shireen Abu Akleh on Friday was one of the largest gatherings of Palestinians in recent memory in Occupied East Jerusalem. Her brother, Anton Abu Akleh, had arrived from the US to oversee her funeral.  He was called into Israeli Occupation police headquarters where they ordered him to not allow any traditional Palestinian funeral customs to be followed, such as: not carrying the coffin on the shoulders of pallbearers and not allowing any Palestinian flags to be displayed.

The Israeli Occupation forces killed Shireen Abu Akleh, and they wanted to orchestrate her funeral as well.

On Friday, the funeral route began at the French Hospital just outside the New Gate at noon.  As the pallbearers lifted her coffin onto their shoulders in the process of loading the coffin into a hearse, the Israeli police set off stun grenades and rushed forward and brutally beat the pallbearers and other mourners, including women, with metal batons. Videos of the scene showed a mixed crowd of men and women mourners who were there to accompany the coffin to the church and were beaten severely by the police, while none of the mourners had any weapons, or posed any threat.  The unprovoked attack by the Israeli police, wearing full riot gear, was so forceful that at one point the coffin almost touched the ground, but at the last moment, one pallbearer was able to catch the edge and hold the coffin aloft once more.

The threat to the Israeli government, which prompted the violent response, was the presence of thousands of Palestinians carrying hundreds of Palestinian flags.  The Israeli police were attacking and beating unarmed civilians, living under a brutal military occupation now lasting 74 years.  The occupation of Palestine and subjugation of five million people is a threat to Israel that they are deadly afraid of.

From there the coffin was taken to the Cathedral of the Annunciation of the Virgin in Jerusalem’s Old City. After her funeral service, the coffin was then transported to the Melkite Catholic Cemetery section of the Mount Zion Cemetery complex where she was laid to rest next to her parents.  She was born in Jerusalem, and her mother as well, but her father was from Bethlehem, the birthplace of Jesus Christ.

Rima Baqleh said, “This is the least I can do, participate in the funeral of this iconic woman who has changed the history of Palestine,” she said. “For the first time, she managed to raise the Palestinian flag by thousands of Palestinian people in [Jerusalem’s] Jaffa Gate.”

On Wednesday morning, Abu Akleh was assassinated by an Israeli sniper while standing with a group of four journalists reporting on an Israeli raid into Jenin in the Occupied West Bank. The 25-year veteran journalist for Al Jazeera was wearing a blue flak jacket marked “PRESS” and a helmet.  According to eyewitness accounts from the other journalists, one of whom was shot in the back, there were no Palestinian fighters present, only the Israeli commandos. Al Jazeera and many other international groups and bodies have demanded an impartial investigation into her killing.

Abu Akleh is just the latest American citizen to be brutally murdered by Israelis. The US has made condolence-type statements in the aftermath of her killing, but no one expects any further action to be taken against Israel, which is the closest ally to the US.  Israel has been called an Apartheid State by the Human Rights Watch and has been deemed a racist state by other international groups.  Israel stands in defiance of dozens of UN resolutions, and yet the US remains its staunch supporter.  The US government speaks from one side of its mouth, saying they must defend freedom and democracy around the world, like in Ukraine, and from the other side of its mouth, they support and enable the brutal military occupation of Palestine and the Israeli war crimes and crimes against humanity which have been documented for decades.

If American values are freedom and democracy for all, then Israel does not stand for American values but stands for the exact opposite.  The American people are supposed to be in control of their government, but sadly they are not.  Elected officials enable Israel to act with impunity, while the US taxpayer pays the bills in Israel, with no accountability.  The US State Department policies in the Middle East have remained unchanged, and unchallenged for the last 74 years, regardless of what political party holds the Oval Office.

Marches were held for Abu Akleh in Jenin on Wednesday, and in Nablus, where doctors conducted an autopsy on her body. Her body was then brought to Ramallah, where a memorial service was held for her at the Palestinian Authority’s presidential compound on Thursday, with thousands in attendance. On Thursday, Israeli police raided the home of Abu Akleh and removed the Palestinian flag.

At dawn on Friday, before the funeral procession began, the Israeli Defense Forces raided Jenin, injuring 13 Palestinians, including two in critical condition.  The Occupation forces shelled Palestinian homes during a siege lasting four hours before arresting two men inside the home.

Since March 22, dozens have died in Israel and Occupied Palestine as a result of acts of resistance to occupation, as well as Israeli raids and brutality. The raids in Jenin in the Occupied West Bank are the latest in an escalation of tensions.

The Russian Defense Ministry announced that Israel had launched 22 missiles at Syria on Friday evening. The Syrian air defense system shot down 16 of the 22 missiles and one drone. The targets were the port of Banias and the Syrian Research Center at Misyaf.  Israel used six F-16 jets in the attack which originated from the Mediterranean Sea near Banias, which houses the main oil refinery for Syria.

While Syrians were viewing the funeral of Shireen Abu Akleh on TV all day, by evening the news reports turned to news of the Israeli attack on Syria.  Five people were killed in the attack, including a civilian, seven were wounded, and farmlands were burned.