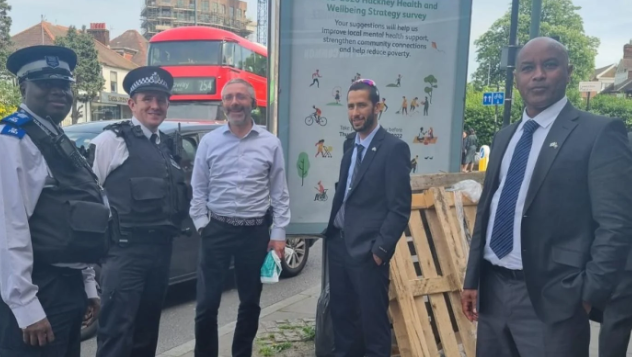 The Metropolitan Police in London received a barrage of criticism on Friday after welcoming an Israeli police team, only a week after Israeli authorities assassinated Al Jazeera journalist and martyr Shireen Abu Akleh and assaulted mourners at her burial.

Hackney Police stated on Twitter that it was “delighted” to welcome the Israeli delegation, who also joined officers from Stamford Hill police, a Hackney sub-district, on a patrol.

The visit comes only a week after Abu Akhleh was killed by Israeli authorities while covering a raid in Jenin, an occupied West Bank city.

The Muslim Association of Britain, a UK-based organization involved in connecting with the larger British public, condemned the visit as “indefensible”.

“Israeli police violently attacked mourners and pallbearers at Shireen Abu Aqleh’s funeral just a few days ago and they routinely raid Al Aqsa Mosque, arresting & assaulting worshippers. How were they welcomed and allowed to freely parade in one of the most ethnically diverse constituencies in London with one of the biggest Muslim communities in the UK, given their appalling violence, racism, and Islamophobia?”

A police monitoring network, NetPol, also criticized the visit and tweeted, “Less than a week after Israeli Police beat mourners at the funeral of Palestinian-American journalist Shireen Abu Akleh, why on earth is Hackney Police hosting a delegation of police from Israel? What on earth are they hoping to learn from each other?”

Pro-Palestine activists in Hackney, who have routinely protested against the factory of Elbit Systems, “Israel’s” largest private armaments producer, also criticized the visit.

UK  Police have had their fair share of scandals in the last months. In December, a police officer was found guilty of offenses during his time in the Merseyside Police Department for 6 years.

In February, London’s police chief Cressida Dick announced she is stepping down following a string of scandals of police misconduct involving racism, sexism, and the murder of a young woman by a London police officer.

According to an official report from England’s police watchdog, London police officers routinely made jokes about rape and exchanged racist messages, detailing a pattern of misogyny and bullying in the force, the latest blow to an embattled service that has faced intense scrutiny in recent months.

In March, Hackney police were heavily criticized following reports of a 15-year-old black schoolgirl being strip-searched and falsely accused of being in possession of Cannabis.

The girl was exposed to a traumatizing search by officers in December 2020 without parental authorization and with no other adults present, which was only made public following the publishing of a safeguarding report launched by the council.