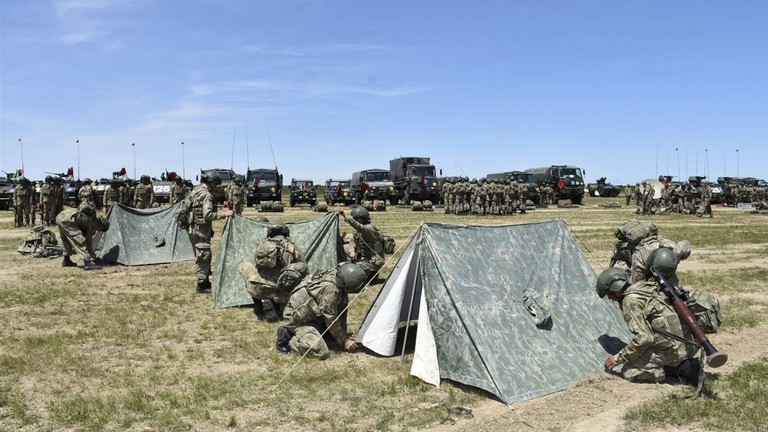 Turkey will soon launch a new military operation in northern Syria, President Recep Tayyip Erdogan said on Monday. Though he did not provide any specifics, the illegal incursion is likely to target areas held by US-backed Kurdish militias.

“We will soon take new steps regarding the incomplete portions of the project we started on the 30-km deep safe zone we established along our southern border,” Erdogan said after a cabinet meeting, according to AP.

“The main target of these operations will be areas which are centers of attacks to our country and safe zones,” he added, according to Reuters. Operations will begin once Turkey’s military, intelligence and security forces complete their preparations, Erdogan said without elaborating further.

Ankara has sent troops into Syria three times already, starting with Operation Euphrates Shield in 2016. The most recent incursion, 2019’s Operation Peace Spring, was met with US sanctions and a war of words between Erdogan and French President Emmanuel Macron. Turkey currently controls portions of Syria’s Aleppo, Raqqa and Hasakah governorates, in addition to supporting militants in Idlib.

Last month, Turkey also sent troops into Iraq, targeting Kurdish militias in the northern regions of Metina, Zap, and Avasin-Basyan in what it called Operation Claw-Lock. Baghdad condemned the operation as a violation of its sovereignty, but has been unable to do anything about it.

Turkey has accused the Syrian Kurdish militia YPG of links to the Kurdistan Workers’ Party (PKK), which Ankara has designated as a terrorist organization. Since 2015, the US has used the YPG as the basis of the so-called Syrian Democratic Forces (SDF), a proxy militia it has armed and supplied to fight against Islamic State (IS, formerly ISIS) terrorists. The SDF is also tasked with denying the territory to the government in Damascus, which Washington seeks to overthrow.

Backed by as many as 2,000 US troops, Washington’s proxies currently hold` the northeastern portion of Syria, including most of its oil wells and arable land.

Erdogan has recently voiced objections to Finland and Sweden joining NATO, due to the fact the two Scandinavian governments have granted political asylum to a number of Kurdish activists that Turkey considers terrorists.