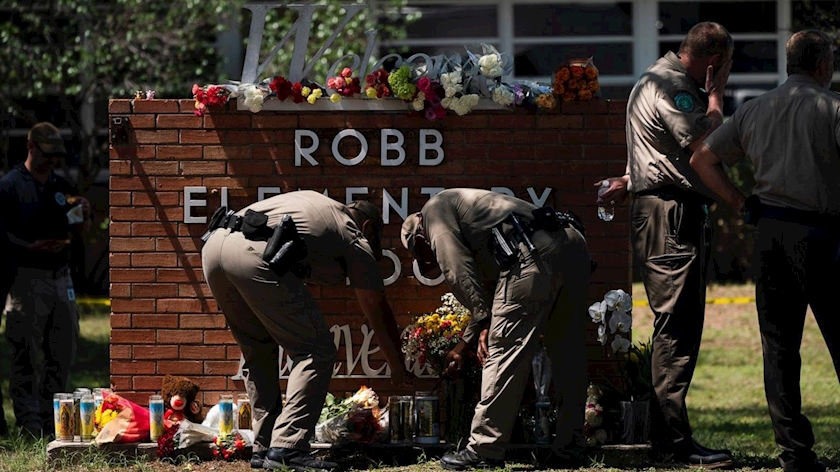 Nineteen children and two teachers were killed in a shooting at Robb Elementary School in Uvalde, Texas, on Tuesday, the Texas Department for Public Safety said.

The 18-year-old gunman is dead, officials said. He shot his grandmother before the mass shooting, authorities say, and she remains hospitalized in critical condition. The shooter’s motive remains unknown, officials say.

President Biden said he will travel to Texas to visit the victims’ families “in the coming days.” He called on the US to turn its collective pain into political action following the deadliest elementary school shooting since Sandy Hook in 2012.

The suspected gunman bought two rifles on his 18th birthday, Texas state senator Roland Gutierrez told reporters. Two assault-style rifles were reportedly purchased from a store in Uvalde county. “That was the first thing he did on his 18th birthday,” Gutierrez said, adding that the gunman had hinted on social media that an attack could be coming. “He suggested the kids should watch out,” he said.

Parents of school children have had to wait for hours in a parking lot to receive the news that their children are dead after being swabbed for DNA, according to New York Times reporter, Jazmine Ulloa. The families of people killed in the Sandy Hook elementary school shooting have pleaded for action on gun control in the wake of the killings at Robb elementary school in Texas.

Deadly gun violence has become an everyday phenomenon in the United States. In 2020 alone, 19,384 people were killed in gun homicides, showing a 35 percent increase from the previous year and the largest one-year increase in gun homicides on record.