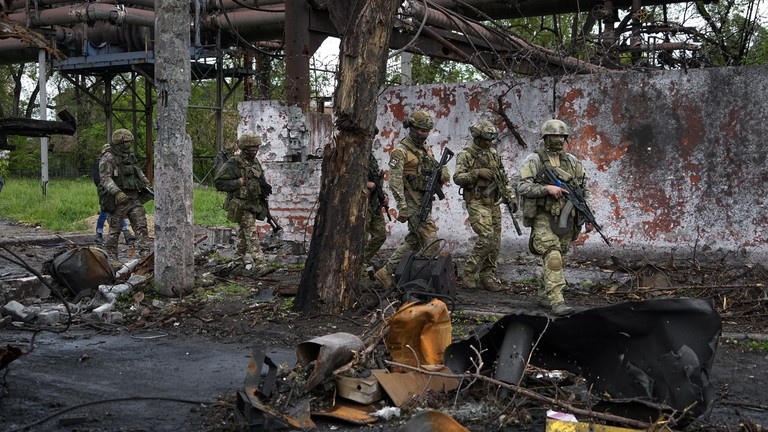 Russian troops on patrol in the city of Mariupol. © AP

The conflict in Ukraine will drag on and Kiev will require more help from Brussels, the EU foreign policy chief says

The conflict in Ukraine is likely to last for a long time but will eventually conclude with peace talks between Kiev and Moscow, EU foreign policy chief Josep Borrell said on Monday.

Borrell said in an interview with France Info that he expects the Russian military offensive to drag on.

According to the foreign policy chief, Moscow will act more aggressively, requiring the EU to keep arming Ukraine and apply further sanctions against Russia. The Russian economy is already slowing down due to the economic restrictions, and further pressure should help Kiev gain a stronger position in future peace talks with Moscow, he claimed.

The events on the ground in Ukraine have apparently persuaded Borrell to amend his perspective on the conflict, with the diplomat saying last month that “this war must be won on the battlefield” by Kiev.

Borrell was speaking several hours before the start of a two-day EU summit on Ukraine that Brussels hopes will see member states adopt a sixth package of sanctions against Moscow, including at least a partial embargo on Russian oil.

EU governments discussed the issue on Sunday and on Monday morning without reaching a consensus, he said. However, the diplomat expressed hope that “there will be an agreement in the end,” despite resistance from Hungary, the Czech Republic and Slovakia.

The proposal now being considered by member states would reportedly ban Russian crude delivered by sea, but not affect pipelines, which are the only supply source for Hungary, the Czech Republic and Slovakia.

“We have to take the individual circumstances of everybody into account,” Borrell said, adding that an EU-wide solution would give those three countries more time to find other sources of oil.

Russia attacked Ukraine in late February, following Kiev’s failure to implement the terms of the Minsk agreements, first signed in 2014, and Moscow’s eventual recognition of the Donbass republics of Donetsk and Lugansk. The German- and French-brokered protocols were designed to give the breakaway regions special status within the Ukrainian state.