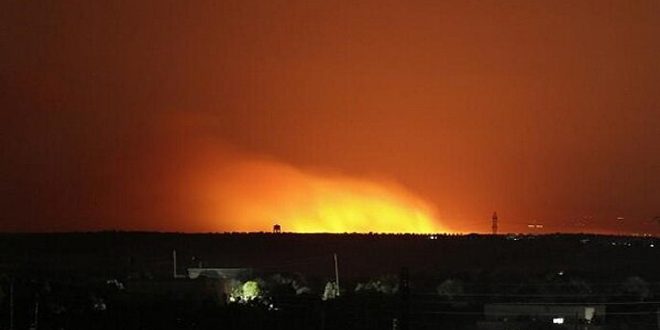 Dozens of mercenaries of the Turkish occupation from terrorist organizations were killed and others were injured in the explosion of a weapons and ammunition depot for them in the village of Babsqa in Idleb northern countryside.

Local sources said that a huge explosion occurred in a large depot of weapons and ammunition belonging to the terrorists of the so-called “al-Sham Legion”, which is directly linked to the intelligence of the Turkish regime, in the vicinity of the village of Babsqa, adjacent to the Turkish border in Idleb countryside.

Large numbers of terrorists were killed or injured, and missiles and shells scattered in the sky over the area as a result of the intensity of the explosion, according to the sources.

The sources pointed out that the depot, which includes thousands of rocket shells provided by the Turkish occupation forces to their terrorist groups, exploded while dozens of terrorists were inside and around it.

According to the sources, the explosion took place while leaders of al-Sham Legion were inspecting the depot in preparation for transferring quantities of missiles to terrorist groups’ positions in Idleb southern countryside within the framework of the reinforcements that terrorist organizations have begun to send under the supervision of Turkish intelligence to the areas adjacent to the positions and posts of the Syrian Arab Army in those areas.

The sources indicated that as a result of the explosion, a number of missiles landed in camps housing displaced families and in grazing lands, which led to the outbreak of several fires.

After the explosion drones belonging to the Turkish occupation forces were intensely hovering over the area.