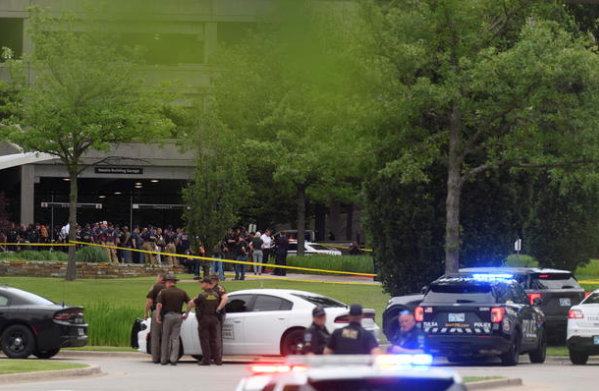 According to authorities, the gunman responsible has also died of an apparent self-inflicted gunshot wound.

According to authorities, four individuals were murdered in a shooting on a hospital campus in Tulsa, Oklahoma, on Wednesday evening.

The gunman who was responsible for the shooting also died of a self-inflicted gunshot wound.

According to the Tulsa Police Department, the incident happened shortly before 5 pm local time on the grounds of Saint Francis Hospital. Officers arrived on the scene within three minutes.

The gunman was not recognized but was characterized as a Black male between the ages of 35 and 40, according to Tulsa Deputy Police Chief Eric Dalgleish during a news conference.

Dalgleish stated he was equipped with a long rifle and a pistol and was discovered on the second level of the hospital’s Natalie Building.

According to the Chief, “The officers that did arrive were hearing shots in the building, and that’s what directed them to the second floor.”

The gunman is believed to have killed himself with a gunshot wound. “Right now, we believe that is self-inflicted,” Dalgleish said, adding that police did not know for sure if he intended to target specific individuals or if the shooting was a random one.

Police did not say whether there were any other injuries. As of Wednesday night, none of the four victims had been officially named.

Muskogee police stated Wednesday night that they got information that the gunman may have planted a device in a house in Muskogee, Oklahoma, 50 miles southeast of Tulsa.

Homes in the immediate vicinity were either evacuated or inhabitants were ordered to shelter in place. Police said a bomb squad was on the site and that they were in the process of getting a search warrant.

In a statement, Oklahoma Gov. Kevin Stitt termed the shooting a “senseless act of violence and hatred,” on Twitter, adding that “Sarah and I are praying for the families of those who lost their lives and for those who were injured.”

US public figures and gun-control advocates urged the US government to take measures that would ensure mass shootings could not happen again. The spike in mass shootings in the US peaked over Memorial Day weekend — spanning Saturday, Sunday, and the federal holiday on Monday, with at least 12 mass shootings.

Following the shooting at an elementary school in Uvalde, Tex., which claimed the lives of 19 children and two teachers last week several members of society, public figures, and advocates vocalized their growing concern regarding the incidents.

Since last Tuesday, 15 mass shootings happened across the US from California to Arizona to Tennessee. People have been enraged that such despicable things have happened over and over again.