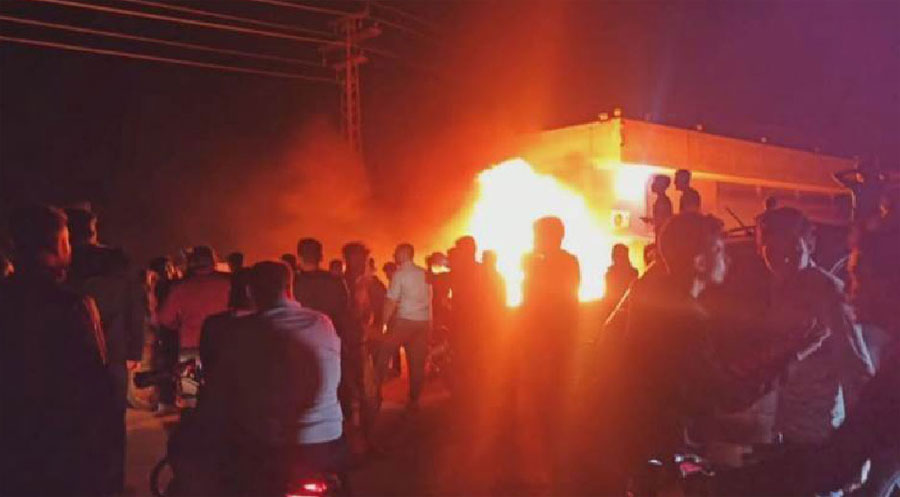 Syrian revolutionaries are revolting against Turkey

Hundreds of Syrians took to the streets in the city of Afrin on June 3 to protest against routine blackouts and a sharp hike in the prices of electricity provided by Turkey.  The electricity is available a mere 10 hours per day, while the summer temperatures are 30 degrees Celsius (86 Fahrenheit) in recent days.

Afrin, in the Aleppo province, has been under Turkish military occupation since 2018, after President Trump gave Turkish President Erdogan the green light to invade Syria.

The protesters stormed the main building of the local electricity company, “Turkish-Syrian Energy” or STE Enerji company, and set it on fire before Turkish-backed mercenaries opened fire on them.  The protesters also set fire to Afrin’s local council building.

The areas occupied by the Turkish military also have Syrian mercenaries in the employ of the Turkish government.  The mercenaries are from the now defunct ‘Free Syrian Army’ which was organized by President Obama and supported by US Senator John McCain.  The mercenaries follow a political ideology called Radical Islam, which is the same ideology as Al Qaeda, ISIS, and the Muslim Brotherhood.  Erdogan and his ruling party, AKP, are followers of the Muslim Brotherhood.

Local reports say at least one protester was killed and two others were injured. As the protests grew in size, demonstrators were seen chanting “Turks go out of Syria” and “Syria is free.”

Similar protests were reported in the cities of Jindires, Suran Marea, and Al-Bab, also in the Aleppo governorate. In Marea, protesters set the local headquarters of the Turkish-backed Local Council on fire.

Shortly after these protests swept through Aleppo, Turkish forces shelled a high voltage power line that supplies power to Tal Tamr and other villages in the countryside of Hasakah governorate, leaving the area in a black-out.

Afrin was occupied by Turkey and its mercenaries during the military offensive against the Kurdish fighters in 2018, causing the displacement of hundreds of thousands of people. Since the invasion, the residents have suffered through violations of human rights, lack of basic services, and constant insecurity.

Similar protests were reported in other Syrian cities under Turkish occupation such as Azaz on Friday. Discontent has been brewing against the Turkish occupation, as mercenaries allied with Turkish forces have been accused of embezzling millions in humanitarian aid and of using the global fuel and wheat crisis to hike the price of daily necessities.

The demonstrations come as Erdogan has renewed his threats to carry out a fresh military offensive against Kurdish fighters in Syria. Recently he announced that his troops will proceed with the planned military invasion of Syria, starting with the cities of Tal Rifaat and Manbij.

The operation will resume efforts to establish a 30-kilometer long ‘safe zone’ along Turkey’s southern borders to curb threats from the Kurdistan Workers Party (PKK) and the Kurdish People’s Protection Units (YPG), which is the backbone of the US-backed Syrian Democratic Forces (SDF) which Ankara labels as terrorist organizations.

Turkey says US-backed SDF forces pose a threat to its borders, and in response, Turkish troops have occupied large swathes of northern Syria.

In northeastern Syria, US and Russian forces mobilized intending to stop Turkey from carrying out a new attack against SDF. While US forces moved on the ground, Russian warplanes scrambled in the air.

Fighters of the Syrian opposition factions loyal to Turkey

Residents of Manbij, in the eastern countryside of Aleppo, have documented the outcome of the attacks, warning that the Turkish operation will lead to the displacement of the indigenous population and the city’s religious, sectarian, and ethnic components.

Turkey informed the United States it is committed to taking necessary measures against “terrorist organizations” threatening its national security, and that it will not tolerate the escalation of attacks against Turkish territory from the areas controlled by the US-backed SDF in northern Syria.

Ankara reports that the risk of terrorist attacks from SDF-run areas in Syria against Turkey has increased recently, and emphasized that the PKK-affiliated terrorist organizations are an existential threat not only to Syria’s territorial integrity but also to Turkey’s national security.

US Ambassador to the United Nations, Linda Thomas-Greenfield, visited the border between Turkey and Syria to assess a long-running UN operation delivering humanitarian aid into northwest Syria, near Hatay, Turkey on June 2, 2022.

UN trucks delivering food and aid into Syria from Turkey were observed and reported by Serena Shim, an American journalist. She saw they contained armed terrorists and weapons being delivered into northern Syria. Not long after her reporting, she was mysteriously killed in a car accident, after a cement truck hit her small car in Turkey.  The accident and the driver were never investigated, even though he fled the scene.

In 2017 President Trump shut down the CIA operations which funded, trained, and supported Radical Islamic terrorists in Turkey to fight in Syria for regime change.

Turkey informed the United States it is committed to taking necessary measures against “terrorist organizations” threatening its national security, and that it will not tolerate the escalation of attacks against Turkish territory from the areas controlled by the US-backed Syrian Democratic Forces (SDF) in northern Syria.

The US occupies areas in Syria, and the US military was tasked by Trump with stealing the oil produced in the largest oil field in Syria and allowing the US-backed SDF to sell the oil to fund their operation.

The Russian military was invited into Syria by the government in 2015. Russia has fought against ISIS, Al Qaeda, and all affiliated terrorist groups which follow Radical Islam.  The Muslim Brotherhood is outlawed in Russia, Syria, Egypt, and the UAE. US Senator Ted Cruz has tried to pass legislation in the US Congress to designate the Muslim Brotherhood in the US as a terrorist group but came up against heavy opposition from both Democrats and Republicans who are influenced by the group.

Recently, the Russian army reinforced its ground and air forces at the airport of Qamishli, in Hasakah province.

Turkey concluded two separate deals with both the United States and Russia during its Operation Peace Spring, which it launched in northern Syria on October 9, 2019.

According to the agreements, Russia and the US pledged to withdraw YPG units to a depth of 30 km to the south of the Turkish border, but Ankara says they did not fulfill their promises.

Washington says that Turkey did not abide by the understanding signed between them. Russia had a signed agreement with Turkey to secure the M4 highway from Latakia to Aleppo, by removing all Al Qaeda groups from Idlib.  However, Turkey has protected and reinforced the terrorist groups in Idlib, which is the last terrorist-occupied area in Syria.  Turkey established a network of military outposts which protect the Al Qaeda affiliated groups who occupy Idlib.  The highway remains closed to trucks and passengers for fear of attack.

During the chaos of the US-NATO attack on Syria, which began in 2011, some Kurds in Syria formed military units and got the backing of the US government, while advancing a separatist agenda in the region.  The SDF and YPG were partners with the US troops who invaded Syria to fight ISIS.  This US support of a terrorist group that has killed 40,000 people in Turkey over decades has driven a very big wedge between Ankara and Washington, DC.

Under Erdogan’s plan, he will rid the north of Syria of the terrorist group who plans to establish their own ‘homeland’ there, and he will convert the area into a safe zone to settle Syrian refugees now living in Turkey.  The Turkish people have decided the refugees must go home, and they blame all their economic woes on the Syrian refugees.

Zahran Alloush had been the leader of a Radical Islamic terrorist group, Islamic Army, backed by Saudi Arabia in East Ghouta, the suburbs of Damascus, along with his brother, Mohamed Alloush, who now lives in Turkey and owns a chain of restaurants there.

In 2016 he was an official with the Syrian National Coalition, which the US government recognizes as the only legitimate representative of the Syrian people.  His position was the chief negotiator representing the US position in the Geneva talks to find a political solution to the Syrian conflict.  In 2017 he was chosen as the speaker of the delegation for the revolutionary movements at the Astana peace process talks for peace in Syria.

After he resigned, he was accused of stealing $ 47 million, which he embezzled from funds supplied to the terrorists in Syria to fight the US-sponsored regime change.

Recently, he bought a company in Turkey that mines chrome, Al Ghuraba, (The Strangers).