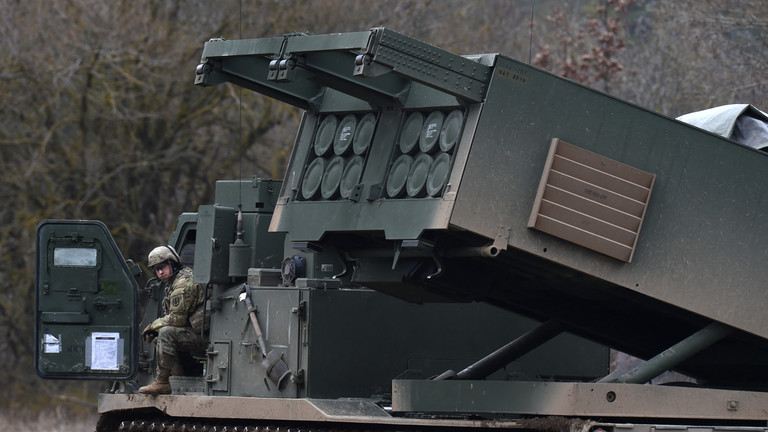 Britain is going to supply Ukraine with long-range missile systems that can strike targets up to 80 km (50 miles) away, Defence Secretary, Ben Wallace, has announced.

The shipment is going to consist of several US-made M270 launchers. The UK stopped short of revealing the number of units it is planning to provide; however, the BBC claimed on Monday that “it will be three initially.”

“These highly capable multiple-launch rocket systems will enable our Ukrainian friends to better protect themselves against the brutal use of long-range artillery, which Putin’s forces have used indiscriminately to flatten cities,” Wallace explained in a statement.

The defence secretary added that as Moscow’s “tactics change, so must our support to Ukraine.”

According to the UK government, Ukrainian soldiers will be trained in the use of the M270 in Britain in the coming weeks.

Announcing the delivery, Wallace emphasized that the UK was in the lead when it came to providing Ukrainian armed forces with “vital weapons.”

London’s decision to supply the weapons comes less than a week after Washington said it would send four M142 High Mobility Artillery Rocket Systems (HIMARS) to Ukraine, which is a lighter cousin of the M270.

US Secretary of State Antony Blinken said at the time that the White House had received guarantees from the Ukrainian leadership that these long-range systems would not be used to hit targets in Russia. However, days later a top Ukrainian official as well as the newly appointed US ambassador to Kiev seemed to contradict that claim, saying that Ukrainian forces were free to choose their targets, including ones in Crimea.
Russia re-absorbed the peninsula after a referendum in 2014; though Ukraine still considers the region to be part of its territory.

The same target restrictions apparently apply to the systems headed to Kiev from the UK, the BBC reported.

Since the M270 MLRS are manufactured by the US, London first had to receive Washington’s permission for the transfer.
According to Politico, citing an anonymous source, British Prime Minister Boris Johnson discussed the issue with President Joe Biden on Wednesday morning.

While Britain and the US have been the leading supporters of Ukraine in terms of weapons, until recently both had stopped short of providing long-range missiles to Kiev despite its repeated pleas.

According to American media, the Biden administration had been wary that the Kremlin could consider such a delivery as a further escalation and respond unpredictably.

Ukraine has hundreds of Soviet-designed multiple launch rocket systems, however, the US-made weapons have a longer range (up to 300 kilometers (186 miles) depending on the missile type and are said to be more accurate.

Ben Wallace, said in a statement on Wednesday that London was planning to give Kiev missiles that can hit targets up to 80 km away, offering a “significant boost in capability for the Ukrainian forces.”

In an interview with Russian state TV, President Vladimir Putin expressed doubt that the Western-supplied rocket systems would be able to tip the balance in Ukraine’s favor, arguing that these weapons were essentially “nothing new.” The Russian president, however, made it clear that Moscow would respond to the shipment of longer-range missiles to Ukraine with strikes “at those objects that we have not yet struck.”

Putin also reiterated Russia’s long-standing position on Western arms deliveries to Ukraine, saying “they only serve to prolong the conflict.”