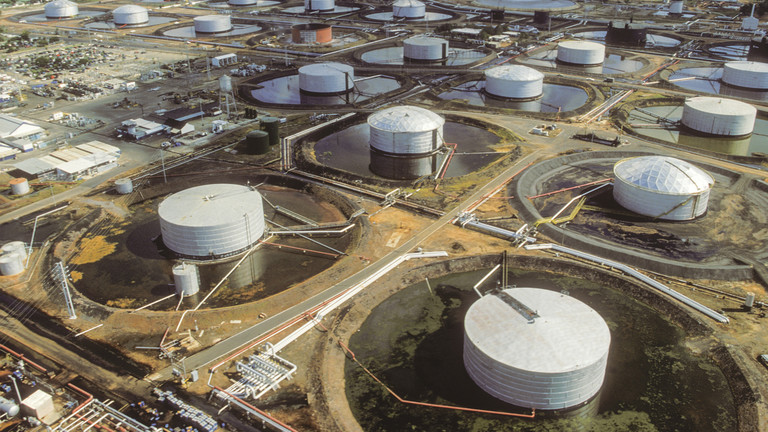 Italian oil company Eni SpA and Spain’s Repsol SA could start shipping Venezuelan oil to Europe as soon as next month, Reuters reported on Monday. Washington believes Caracas will not benefit financially from these cashless transactions, and that the money will be used to pay Venezuela's debt, according to the report. The US, which has imposed economic restrictions on the Latin American nation, gave the green light to the two companies to resume shipments, Reuters says, hoping that the crude from the sanctioned nation can help

The supplies are expected to make up for Brussels’ embargo on Russian oil, Reuters says

Washington believes Caracas will not benefit financially from these cashless transactions, and that the money will be used to pay Venezuela’s debt, according to the report.

The US, which has imposed economic restrictions on the Latin American nation, gave the green light to the two companies to resume shipments, Reuters says, hoping that the crude from the sanctioned nation can help Europe become less dependent on Russia.

The volume of oil that Eni and Repsol will receive will not be large, Reuters said quoting its sources, which means the impact on global oil prices will be modest.

The shipments will be allowed under a condition that the oil received “must go to Europe. It cannot be resold elsewhere,” Reuters said.

Eni and Repsol, which have joint ventures with Venezuela’s state oil company PDVSA, can count crude shipments on unpaid debts and overdue dividends, according to the agency. The deal would resume the oil-for-debt swaps halted two years ago.

Caracas has been under US sanctions for over 15 years. The latest round of restrictions, imposed in 2019 following allegations of election fraud, has seen all Venezuelan government assets frozen in the US and any dealings with US citizens and companies barred.

However, after the start of Russia’s military operation in Ukraine in February and subsequent bans on Russian oil in the US first and a partial embargo in Europe, Washington turned to Venezuela for oil relief and indicated that it may relax economic pressure on Caracas, including allowing it to increase its oil exports. Before the war in Ukraine, Russia supplied roughly 30% of the oil consumed in the EU.