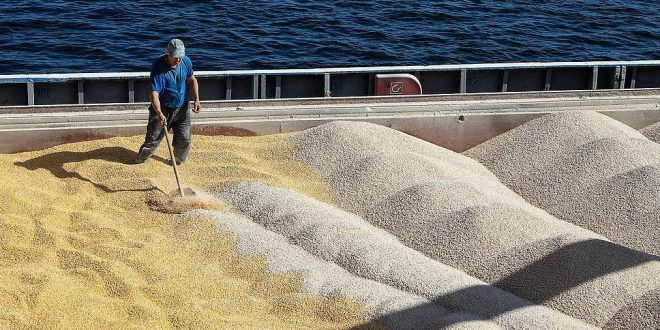 Four routes to export grain from Ukraine .. Safe passage of ships is necessary for shipping grain of Ukraine

Russia, Ukraine, Turkey and the United Nations are negotiating ways to resolve the issue of blocked grain supplies from Ukraine, Tass reported today.

Safe passage of ships is necessary for shipping grain of Ukraine. Russian President Vladimir Putin came up with several variants of solving the problem and expressed readiness to assist the process. However, Kiev insists that Russian troops should be withdrawn before the deliveries can begin.

According to Tass, Putin suggested in previous remarks several routs and scenarios that make grain deliveries from Ukraine possible.

First,via Berdyansk and Mariupol, where Russia is ready to create “the required logistics” and ensure easy transportation of grain from the ports of Berdyansk and Mariupol “without any preconditions. Peaceful transportation and guaranteed safe passage to the ports, as well as security of navigation via the Black Sea and the Sea of Azov is among Russia’s possible guarantees.

The second rout, via Odessa, where Russia does not oppose attempts to transport grain via the Kiev-controlled port of Odessa in Ukraine’s south and is ready to guarantee safe passage of ships. And Ships loaded with grain can leave the port only after mines are removed from the surrounding waters, and the ships, earlier sunk by the Ukrainian side, are lifted from the seabed.

The third rout, Via Western countries, transporting grain via the Danube River, towards ports in Romania.

The fourth rout, via Belarus, where transportation via Belarus will not require any carriage adjustments. It also makes direct deliveries to Baltic ports possible. Nevertheless, western nations and Ukraine reject the initiative, because it envisages removal of sanctions imposed on Belarus.

Global prices for wheat and corn have increased significantly since the start of the year. The UN Security Council declared during its May 21 session that the world has enough wheat for ten weeks, and forecasts are worse than during the crisis years of 2007 and 2008.

According to a Bloomberg report, Russia and Turkey have tentatively agreed to unblock the port of Odessa. Ankara plans to set up a special center in Istanbul to track and coordinate cargo ships. Moscow, in turn, insists on inspection of all ships coming to Odessa to prevent possible arms deliveries.