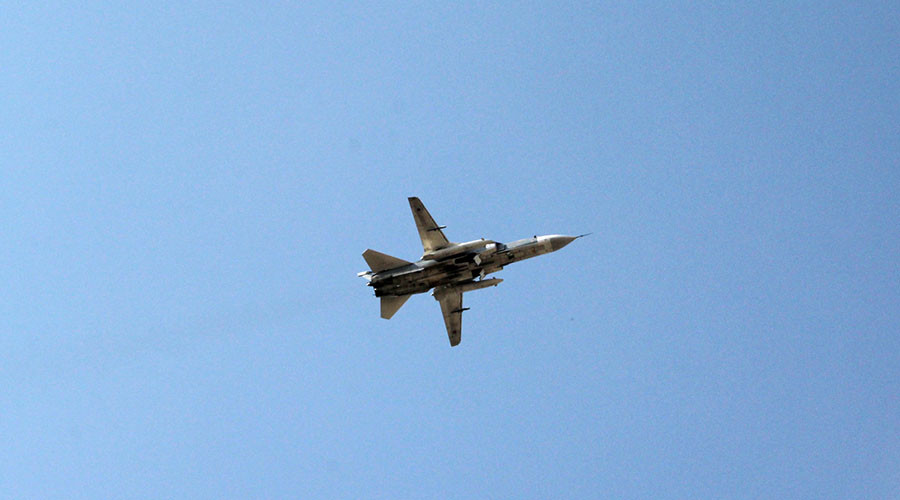 A Russian Su-24 strike aircraft in the sky over the Khmeimim airbase in Syria. Photo: Dmitriy Vinogradov / RIA Novosti

The Syrian Arab Air Force (SyAAF) and the Russian Aerospace Forces (VKS) have carried out a joint live-fire exercise, the Syrian Ministry of Defense announced on June 8.

“All illusive targets were monitored and completely destroyed while aerial targets were hit at night for the first time,” the statement reads.

Syrian and Russian warplanes also conducted a joint patrol along the Israeli-occupied Golan Heights as well as over the country’s eastern and northern regions, where American and Turkish forces are present.

“The joint exercises, as a whole, showed high coordination between the pilots of the two friendly armies and great cooperation in different situations,” the Syrian MoD said.

According to the ministry, Su-35s, Su-34 and Su-24M fighter jets from the VKS as well as MiG-23ML and MiG-29SM fighter jets from the SyAAF took part in the exercise. A Russian Defense Ministry statement cited by the Interfax news agency also revealed that an AEW&C [airborne early warning and control] aircraft of the VKS, most likely a Beriev A-50U, was also involved.

The VKS has been working to help the SyAAF rebuild its capabilities which deteriorated over the eleven past years as a result of the war in Syria.

The exercise, which was the first of its kind since the beginning of Russian military operations in Syria, was likely a message to Israel, which recently intensified its attacks on Syria, as well as to Turkey, whose military and proxies are now preparing to launch a new operation in the war-torn country.