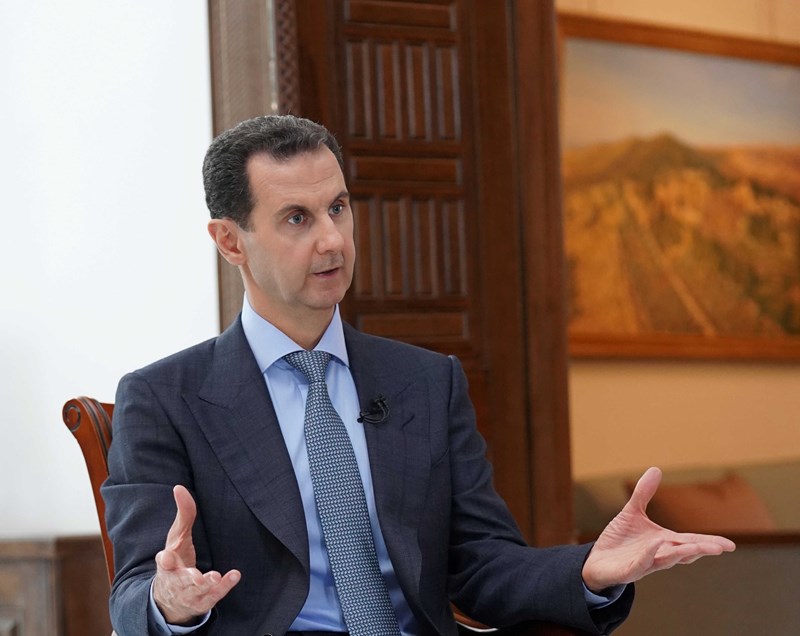 Al-Assad: Turkish invasion will be confronted with full force

Syrian President Bashar Al-Assad says that Russia is exposed to an ongoing war that is not exclusively related to the expansion of NATO.

Syrian President Bashar Al-Assad stressed today, Thursday, that Russia is facing a war that is not entirely related to the issue of NATO expansion.

In an interview for RT,  the Syrian President highlighted how this war has been ongoing since before the start of communism and before the first world war.

Al-Assad emphasized how “Russia is an ally of Syria, and Russia is exposed to a war that I do not link to the issue of NATO expansion, as some believe. This war did not stop even before communism and before World War I. The war continues. Russia’s role here is essential as part of the international balance.”

He added that “we can look at Russia from two angles: the angle of an ally who, if it wins a battle, or if its political position on the world stage becomes stronger, this will be profitable for us, and from another angle, the strength of Russia today constitutes a restoration of the lost international balance, even if it is a partial restoration, and this balance that we seek will be reflected primarily on the small countries, and Syria is one of them. This is the minimum reason, without going into other legal details, but I am talking strategically now.”

Al-Assad warned that “Syria will resist any Turkish invasion of its lands at the official and popular levels,” noting that “If there is an invasion, there will be popular resistance in the first stage….Of course, in the places where the Syrian army is positioned, and it is not deployed to all regions in Syria, and when military conditions allow for direct confrontation, we will do this thing.”

The Syrian President shed light on the confrontations that occurred two years ago between the Syrian and Turkish armies, noting that the Syrian army was able to destroy some Turkish targets that entered Syrian territory… “The situation will be the same according to what the military capabilities allow… In addition, there will be popular resistance.”

Yesterday, an Al Mayadeen correspondent reported that in light of Turkey bolstering its military in Syria, the Syrian armed forces enforced its military points in Manbij, Qamishli, and Tell Rifaat in the face of Ankara’s Euphrates Shield forces.

Erdogan’s stance against the Kurdish fighters has also soured relations with Finland and Sweden, who have not yet received Turkey’s approval to join the Atlantic Alliance because of their refusal to brand the PKK as a terrorist group. Erdogan is currently trying to pressure both countries into branding the PKK as terrorists in exchange for their accession to NATO.