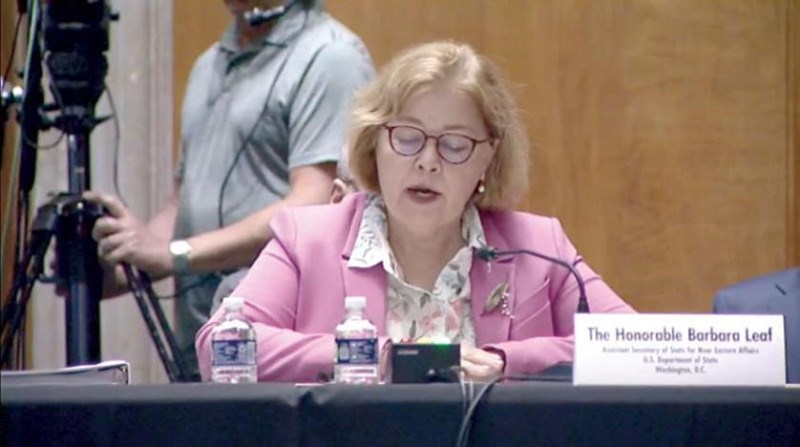 The US, through one of its secretaries, stresses the need “to use all our tools, including the Caesar Act” to further pressure the Syrian President, Bashar Al-Assad.

Barbara Leaf, US Assistant Secretary of State for Near Eastern Affairs, has ruled out any normalization with the regime of Syrian President Bashar Al-Assad.

In her testimony before the Senate Foreign Relations Committee on Wednesday, Leaf said, “I want to be clear on what we have not done in Syria, and what we will not do, which is: support efforts to normalize or rehabilitate Bashar al-Assad; lift sanctions on the regime; or change our position opposing reconstruction in Syria until there is authentic, enduring progress towards a political solution.”

“Bashar al-Assad and the coterie around him remain the single largest impediment to that goal,” she claimed.

On the humanitarian situation in Syria, which was induced and exacerbated by the presence of occupation forces on Syrian soil like the US, she said, “Humanitarian needs are higher than ever, compounded by the COVID 19 pandemic, historic levels of drought, decades of mismanagement and corruption by Assad and his cronies.” Her statement coincides with the US’ neglect of Afghanistan, which is suffering in silence.

US “priorities” in Syria

The US Assistant Secretary of State for Near Eastern Affairs listed her country’s priorities in Syria, which allegedly include, “defeating ISIS and Al-Qaeda, increasing access to humanitarian aid, controlling violence by preserving ceasefire agreements, and promoting accountability for the Assad regime’s atrocities.”

She pledged to continue “to use all our tools, including the Caesar Act, to press the Assad regime.”

“On existing ceasefires, I would note that we are deeply concerned by recent increased rhetoric from Turkey about potential escalation in Northern Syria and we have stepped up our diplomatic engagements to try and continue to de-escalate any tensions,” she underlined.

In a press briefing last week, US Secretary of State Antony Blinken claimed that Washington opposes any escalation in Syria while voicing his country’s support for the existing fire lines that allow for fighting ISIS on Syrian soil, as per his claims.

“We continue effectively to take the fight through partners to dashed ISIS [Islamic State] within Syria, and we don’t want to see anything that jeopardizes the efforts that are made to continue to keep ISIS in the box that we put it in,” Blinken added.

Pointing to Iranian influence in Syria, the US diplomat claimed that Iranian forces, including the IRGC, as well as Hezbollah and Tehran-backed armed groups, “threaten the security of our allies and partners, including Israel and Jordan, and play a destabilizing role in Syria.”

Meanwhile, members of the Senate Foreign Relations Committee, both Democrats and Republicans, blasted the lack of a clear US strategy in Syria.

Its chairman, Democratic Senator Bob Menendez, encouraged the United States and the international community to “hold Assad accountable for his crimes,” advocating for a “clear American policy,” although none of Al-Assad’s claimed crimes or atrocities were proven true.

He also criticized normalization with the Syrian government, noting that it “strengthens Iran’s influence and its attacks on the countries of the region.”

Leaf claimed she was “shocked” when the UAE welcomed Assad in March, during his first visit to an Arab country after the war in Syria.

It is worth noting that Syria sent a letter to UN Secretary-General Antonio Guterres and to the UN Security Council about the war crimes of the US-led international coalition in the city of Raqqa in 2017, the Syrian Foreign Ministry announced in a statement released by SANA.

In its official letter to the UN, the Syrian Foreign Ministry said that the “time has come to shed light on this humanitarian, political and legal issue.”

“US official sources have admitted to the killing and injuring of 240 civilians in Raqqa out of 38 different incidents,” the Ministry highlighted.

Moreover, engineering teams affiliated with the US occupation and its allies, most notably SDF, performed maintenance operations on a number of oil wells near the US occupation’s base in Syria’s Koniko gas field in the countryside of Deir Ezzor in order to rehabilitate it and bring it back into production.

The move aims to increase US-backed SDF oil production in light of the global energy crisis.

Last year, the Russian Sputnik agency obtained photos and videos documenting the moment the US occupation forces operated a column of tanks loaded with stolen Syrian oil from Syrian territory to northern Iraq “through the illegal Al-Waleed crossing at the Al-Hasakah countryside.”

Sources revealed that there were 25 tankers, accompanied by several four-wheel-drive vehicles equipped with various machine guns belonging to the SDF militants. She also added that hundreds of US army vehicles and tanks do this daily.