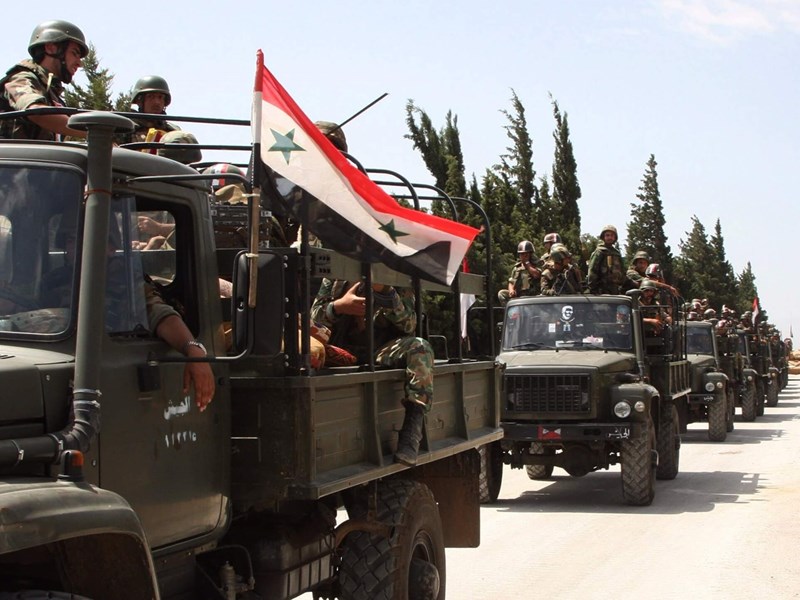 Turkish forces brought tankers and pickup trucks equipped with heavy machine guns to Azaz, as well as more than 2,500 militants from surrounding areas.

A Syrian field source confirmed Tuesday that the Syrian army is reinforcing its positions and forces and strengthening its fortifications, as Turkish forces bring military reinforcements to the city of Azaz in the northern countryside of Aleppo.

The source told Sputnik that the Turkish forces brought tankers and pickup trucks equipped with heavy machine guns to Azaz, adding that the forces included more than 2,500 militants from the city of Afrin in the northern countryside of Aleppo and several other surrounding areas.

The source indicated that these reinforcements were not the first that Turkey brings to Azaz.

Sputnik cited the Syrian source as saying that the fronts that the Turkish forces are strengthening extend from the town of Kafr Khasher, Kaljibrin, Marea, Azaz, Maryamin, and Jalbul.

The source confirmed that the Syrian army is also strengthening its positions, forces, and fortifications in the area, stressing that Syria will confront any attack.

Al Mayadeen sources had reported that the Russian forces deployed at the Qamishli Airport in northern Syria are bringing new military reinforcements to the airport.

On June 8, sources told Al Mayadeen that a Russian military and security delegation met with the SDF leadership in Al-Hasakah Governorate to discuss the Turkish threats against the cities and towns of the border strip.

In response, an official source in the Ministry of Foreign Affairs and Expatriates considered that “Establishing a so-called safe zone on Syrian territory is a shameful act of aggression and part of Erdogan’s policy of ethnic and geographical cleansing in the occupied Syrian territories, which amounts to a crime against humanity.”

The same source stressed “Syria’s right, under international law, to confront any measures taken by Erdogan’s regime and its terrorist organizations,” urging “all illegal foreign forces to leave Syrian territory.”

Similarly, the Russian Foreign Ministry expressed “its concern over the Turkish military operation in northern Syria, hoping that Ankara will refrain from actions that may lead to a deterioration of the situation in Syria.

The Russian ministry noted that security at the Syrian-Turkish border can only be ensured through the deployment of Syrian soldiers from the Syrian security forces in the adjacent area.