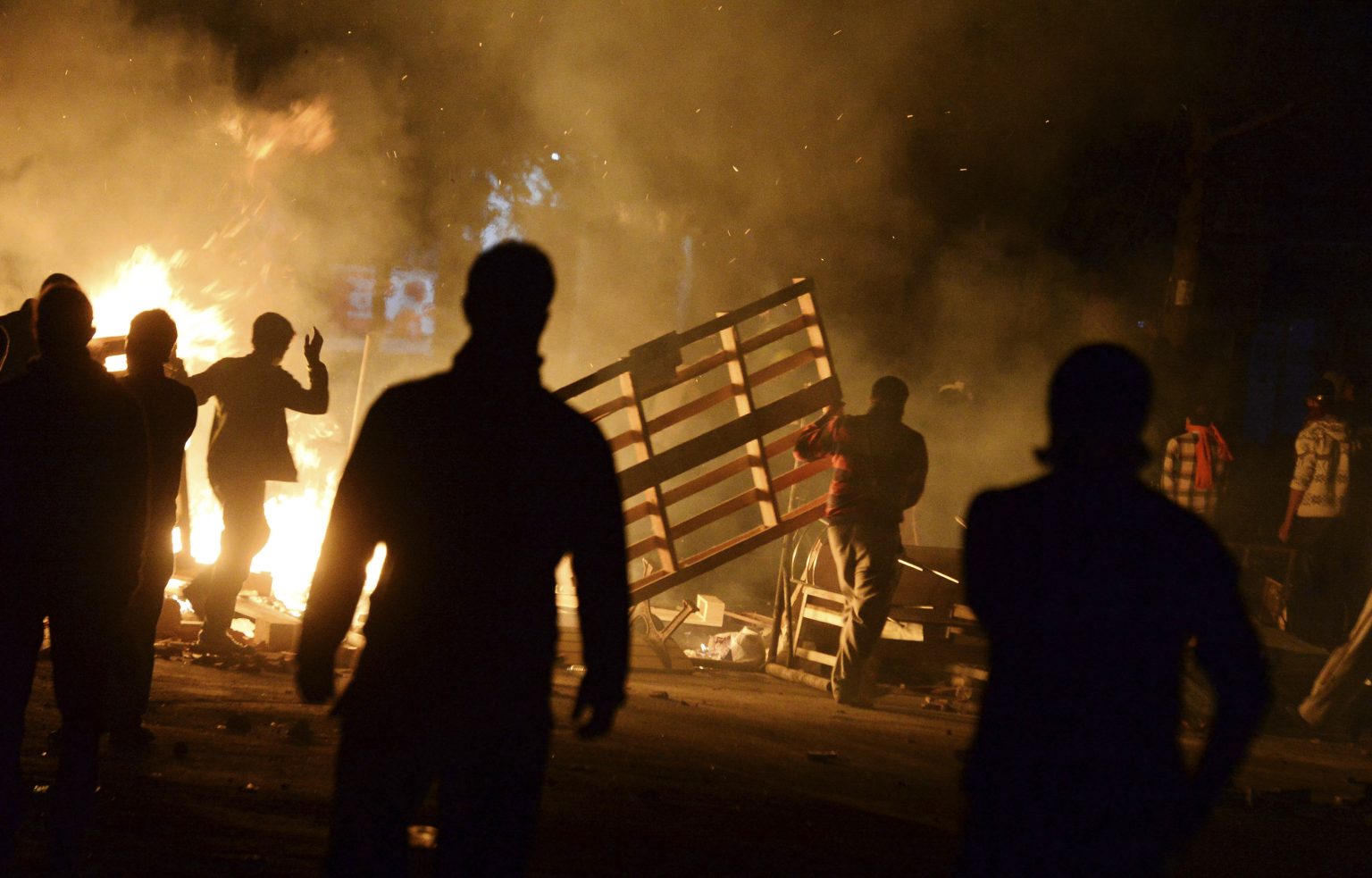 Demonstrators set barricades on fire as they clash with riot police during a protest in the Tuzlucayir neighbourhood of Ankara September 9, 2013. Billed as a symbol of peace between two faiths, a new place of worship has turned Tuzlucayir, a poor suburb of Ankara, into a battleground and exposed wider sectarian tensions within Turkey. The project's blueprint envisages a Sunni mosque rising side by side with a new cemevi, or assembly house, to be used by Alevis, Turkey's biggest religious minority. But with its concrete foundations barely set, Alevis suspect an attempt to assimilate their community into the Sunni Muslim majority and youths from the minority are battling riot police nightly. Picture taken September 9, 2013. To match story TURKEY-PROTESTS/ALEVIS REUTERS/Stringer (TURKEY - Tags: POLITICS CIVIL UNREST RELIGION) - RTX13O61

Syrians live in Turkey without dignity or rights

Suleyman Soylu, Turkish Interior Minister, announced on Saturday new measures affecting Syrians living in Turkey. Firstly, Ankara has banned all Syrians from visiting their relatives in Syria during the upcoming Muslim holiday of Eid al-Adha, which will take place in mid-July.  A similar ban had been applied earlier in the year for the holiday of Eid al-Fitr, which marks the end of Ramadan. Refugees can lose their protected status if they travel back to Syria.

Secondly, as a sign of growing social discontent, Ankara has taken new measures to restrict the movement of Syrians within Turkey who hold residence permits.  The percentage of Syrians allowed to live in neighborhoods, or cities, will be reduced to 20 percent, with 1,200 districts to be closed from July 1.

Turkey had been renewing residence permits for a six-month duration, but recently dropped that to three months. Under the new rules, when Syrians apply for their next residence permit they will not be allowed to continue to live in neighborhoods, or cities, which are over 20% Syrian in population. They will be forced to choose between going home to Syria or moving to new locations within Turkey which have a lower concentration of Syrians.  This would mean losing their home and job and losing Turkish friends or neighbors who may have provided emotional support.

Experts expect social tensions with Turkish citizens will increase with the new distribution scheme, as Syrians are forced to relocate to other areas in Turkey.  Syrians will likely try to remain invisible in the new areas to avoid conflict with the Turkish population.

Turkey is home to one of the world’s largest refugee populations, with more than 3.7 million people from neighboring Syria have found refuge there.  For Syrian refugees, Turkey implements a temporary protection scheme, which grants a right of legal stay as well as some level of access to basic rights and services but must be periodically renewed.

Over 3,735,000 registered Syrian refugees are present in Turkey, including around 51,000 living in seven camps, primarily located in the southeastern regions of the country. The rest live in host communities, mainly in Istanbul, Gaziantep, Hatay, and Sanliurefa cities.  There are 145, 826 Turkish citizens and 107,468 Syrians registered in Kilis, which is followed by Hatay with 20.6% of the Syrian population. Under the new measures, taxi drivers are allowed to ask customers for their official documents when they travel to different cities. Experts have criticized the Turkish government for using civilians as immigration monitors.

Syrians are pawns in the upcoming election

Turkey goes to the polls in a general election in June 2023.  The economy is in crisis, with the Turkish lira at a record low.  Syrians living in Turkey have been singled out as the cause of all domestic ills in Turkey.  Far-right politicians have capitalized on the social outrage with provocative anti-migrant rhetoric for political gains heading to the election.  Turks blame Syrians for stealing their jobs and increasing rental prices.  Syrians have been known to accept low wages as they try to survive in a foreign country.  Syrians are trying to maintain a low profile to avoid retaliation.

Kemal Kilicdaroglu, the leader of the opposition Republican People’s Party, has pledged to return the Syrians within two years if he takes office, and other opposition parties have made similar promises.  Turkish President Recep Tayyip Erdogan and his AK party are left in the position of having to appease public sentiment against refugees to remain in office.  Erdogan is trying to keep up with the anti-migrant sentiment that echoes across Turkey, while also delivering on the pact with the EU to keep refugees and migrants in Turkey, which cost the EU billions of Euros.

Syrians are registered under the UN-designated temporary protection status in Turkey, and the government cannot force them out as long as they don’t break any laws or are in violation of the terms of their status.  Erdogan has encouraged a voluntary return to Syria, and already about 500,000 Syrians have done so.

For the past two years, Syrians have been targets of hostility in Turkey, which coincided with the economic crisis, which has deepened.  The various political parties picked up on the general theme to place blame on the Syrians in Turkey.  Experts fear the hostility will increase as the election grows nearer.

Erdogan announced last month that he intends to resettle one million Syrians in ‘safe zones’ near the Turkish border in northern Syria.  His plan serves two purposes: he will clear the area of Kurds who he views as terrorists while boosting his re-election campaign by delivering on promises to get rid of the Syrians in Turkey.

Erdogan unveiled 59,000 homes built by Turkey in Idlib for Syrians returning home.  Idlib is the last remaining area in Syria occupied by terrorists.  Hayat Tahrir al-Sham was formerly Jibhat al-Nusra, which was the Al Qaeda affiliate in Syria, and controls Idlib and holds about three million civilians and families of terrorists as human shields.  Erdogan has supported and protected the terrorists in Idlib and has erected dozens of military outposts to prevent Russian or Syrian attacks on the terrorists.  In 2019, Putin and Erdogan agreed to remove the terrorists from the civilians in Idlib and to safe-guard the M4 highway linking Latakia with Aleppo, but Turkey failed to keep their agreement.

Analysts have accused Erdogan of using the ‘safe zones’ to carry out ethnic cleansing which alters the demographics in northern Syria.  Turkish forces and the Syrian Democratic Forces (SDF) often clash in the areas which Turkey occupies.  The SDF is supported by the USA and was partners with America in the fight against ISIS.  Erdogan considers the US-backed militia a terrorist group because of its ties to the YPG and PKK.

Human rights groups have accused these terrorists allied with the Turkish government of torturing, kidnapping, and extorting civilians and seizing the property of Kurds, who have fled Turkish attacks.

Turkey relocated Syrian residents to Ankara after an anti-migrant riot broke out. Syrians have reported racist comments, and feel unable to speak Arabic in public out of fear of personal safety. A 70-year-old Syrian woman was recently kicked in the face by a Turkish man in Gaziantep. The number of refugees deported by Turkey increased by 70 percent this year.

“Turkey under Erdogan should not and cannot be seen as an ally,” Senator Bob Menendez of New Jersey, the top Democrat on the Senate Foreign Relations Committee, said after Turkey’s 2019 incursion into Syria.

US President Joe Biden called Erdogan an “autocrat” and said he would support the opposition’s efforts to defeat him, and implied that Turkey had helped the rise of ISIS by letting foreign fighters cross the border into Syria.