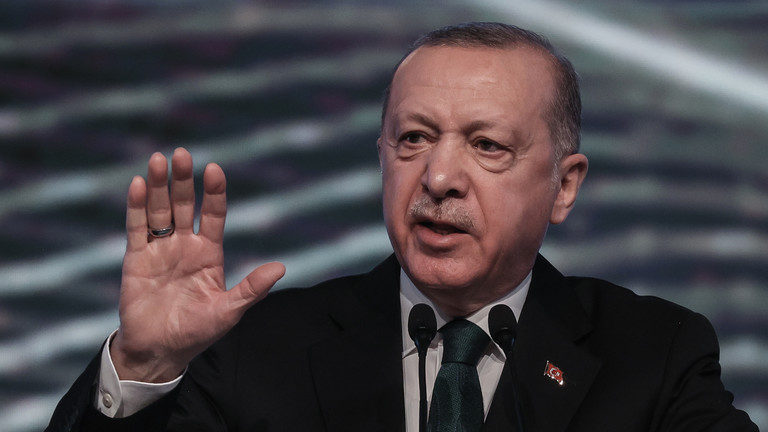 Ankara maintains its opposition to Sweden and Finland joining NATO, the office of Turkish President Recep Tayyip Erdogan said on Monday. The president is expected to reiterate the position to the leaders of NATO states during an upcoming summit in Spain.

Erdogan will say that “Turkey will not compromise its stance towards countries that support terrorism and terrorist organizations” during the key meeting on June 28-30, the message from his office said, as cited by Turkish media.

The office said it will hold two public events before the meeting in Madrid to clarify the stance. One will take place in Brussels on Friday while another panel will happen on the sidelines of the summit in Spain.

The two Nordic nations requested to join the US-led military bloc in late May, citing Russia’s attack on Ukraine as the reason. Previously, both nations maintained neutrality, including during the peak of the Cold War.

Moscow said Sweden and Finland were damaging their national security by seeking formal membership in an organization, which Russia perceives as hostile. Russia will adjust its military posture accordingly, Moscow warned.

Turkey said it will not allow the two nations to join the alliance due a number of grievances, including what Ankara called the harboring of terrorists. The Turkish government was referring to people it suspects of being part of various groups hostile to it, including the Kurdish militant movement PKK and Kurdish militias based in Syria and Iraq.

NATO Secretary General Jens Stoltenberg acknowledged that Turkey’s resistance to the proposed enlargement came as a surprise. “Earlier in the process, we had no reasons to believe there would be any problems,” he told the Financial Times on Monday.

The governments of Sweden and Finland said they were willing to compromise with Turkey by toughening up their respective anti-terrorism laws and reviewing restrictions on arms exports to Turkey, which they imposed in response to Turkish attacks on Kurdish forces in Syria.

But they are reportedly unwilling to meet Turkish demands on extradition requests for people Ankara accuses of having terrorist ties. President Erdogan specifically mentioned rejected requests as a reason to stonewall the two nations’ accession to NATO.

According to Finish media, the country received 10 extradition requests from Turkey between 2019 and 2022 and has processed seven of them, while granting only two.

Turkish demands seem particularly difficult for the Swedish government, which requires the support of Kurdish lawmakers to stay in power. Last week, the ruling Social Democrats confirmed they will stick to a deal they struck with Kurdish MPs in November to save their justice minister from a motion of no-confidence.

Amineh Kakabaveh, an independent MP of Kurdish ethnicity, threatened to join the opposition during the vote, unless the government made a public pledge in the face of pressure from Ankara.