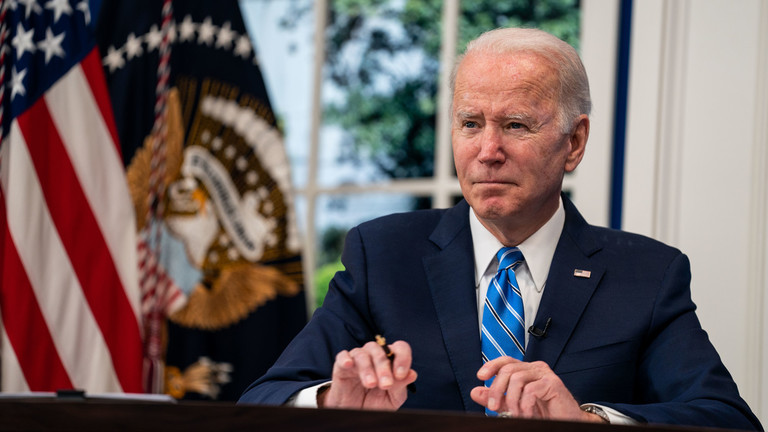 Biden to give $1 billion more in weapons to Ukraine

US will send artillery and advanced rockets to Kiev

Washington will give Kiev another $1 billion in “security assistance,” including artillery, ammunition and advanced missiles, US President Joe Biden announced on Wednesday after a phone call with his Ukrainian counterpart Volodymyr Zelensky.

Biden informed Zelensky that the aid would include “additional artillery and coastal defense weapons, as well as ammunition for the artillery and advanced rocket systems that the Ukrainians need to support their defensive operations in [Donbass],” according to a readout of the call released by the White House.

The two leaders also discussed Wednesday’s meeting of the ‘contact group’ in Brussels, led by US Defense Secretary Lloyd Austin, to “coordinate additional international support for the Ukrainian Armed Forces.”

In addition to the weapons and ammunition, Biden said the US would send Kiev another $225 million in humanitarian assistance, for “supplying safe drinking water, critical medical supplies and healthcare, food, shelter, and cash for families to purchase essential items.”

While Biden did not specify the types of weapons being sent, the Pentagon’s under secretary for policy Colin Kahl revealed on Tuesday that the rocket artillery the US and the UK are sending to Ukraine will be supplied with heavy guided missiles with a range of up to 70km. Previously, the White House had said the HIMARS launchers would come with “battlefield munitions” and that Ukraine had given the US assurances it would not use them against Russian territory.

The Biden administration has previously provided Ukraine with over $5.3 billion in military assistance, of which $4.6 billion has come since February 24, according to Kahl. The $1 billion announced Wednesday is on top of these numbers.

In meetings ahead of the Madrid summit, NATO leaders also doubled down on deliveries of heavy weapons to Ukraine.

“We stand united here that it is crucial for Russia to lose the war,” Dutch Prime Minister Mark Rutte, who hosted NATO secretary-general and six other leaders from the bloc, said on Tuesday in The Hague. “And as we cannot have a direct confrontation between NATO troops and Russia, what we need to do is make sure that Ukraine can fight that war, that it has access to all the necessary weaponry.”

On Tuesday, Ukrainian artillery struck a village in Russia’s Bryansk Region, wounding six civilians. Rockets and artillery shells also rained on the city of Donetsk in Donetsk People’s Republic, in the worst bombardment since the beginning of the conflict in 2015, local authorities said. Five civilians were killed and more than 30 were wounded.