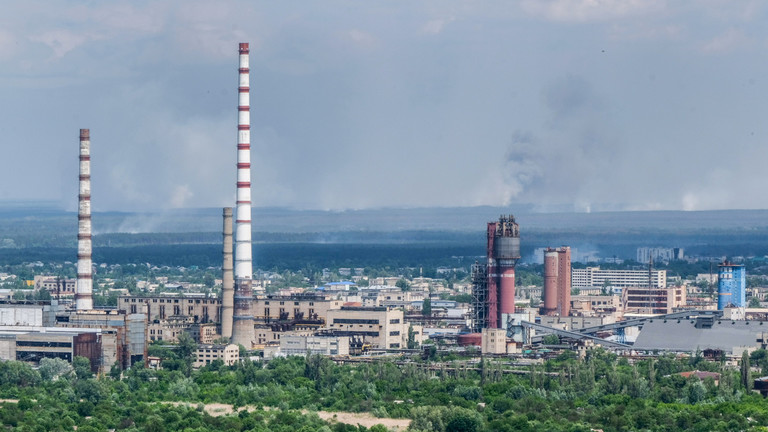 Moscow says it will allow civilians to leave the besieged chemical plant, but will block Ukrainian soldiers seeking to escape

The Russian military opened a humanitarian corridor for trapped civilians to leave the besieged Azot chemical plant in the city of Severodonetsk on Wednesday morning.

On Tuesday, Moscow said Kiev had asked it to provide safe passage for civilians wishing to leave the plant. It requested that non-combatants would be allowed to flee to the Ukrainian-controlled city of Lisichansk on the other side of the Seversky Donets River, the Russian military said.

However, this plan was rejected on the basis that it was physically impossible, given that all bridges connecting the city to Lisichansk had been destroyed. Moscow also claimed the proposal could be a scheme to enable blockaded Ukrainian troops to escape the Azot plant.

Instead, the Russian side agreed to allow civilians leave in the other direction to the town of Svatovo, which is controlled by the Lugansk People’s Republic (LPR).

The humanitarian corridor will remain in place for 12 hours from 8am local time, a statement from the Russian military said. The provision of safe passage was confirmed on Wednesday morning by a spokesman for the LPR militia.

The Russian military expressed skepticism about the willingness of the Ukrainian troops to allow civilians leave Azot. It claimed that the peaceful residents of the city had been forced by Ukrainian soldiers to go to the plant to serve as human shields.

LPR officials estimated that as many as 1,200 civilians and 2,500 troops may be sheltering at the plant, which is located on the western outskirts of Severodonetsk.

Russia attacked its neighboring state in late February, following Ukraine’s failure to implement the terms of the Minsk agreements, first signed in 2014, and Moscow’s eventual recognition of the Donbass republics of Donetsk and Lugansk. The German- and French-brokered protocol was designed to give the breakaway regions special status within the Ukrainian state.