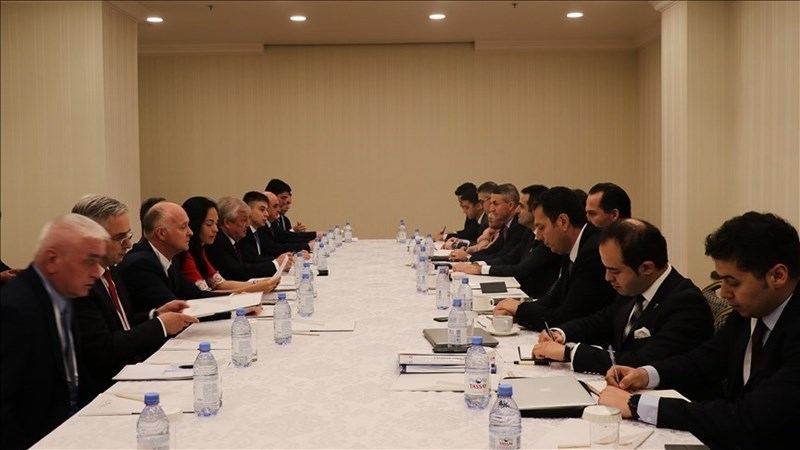 The delegations of the guarantor countries, Turkey, Russia, and Iran, have begun talks within the framework of the 18th round of the Astana talks in Nur-Sultan, Kazakhstan.

The meeting was held on the sidelines of the 18th International Meeting on Syria in the Astana format.

Minister Sousan underlined the need for the United Nations to assume its responsibilities to curb the aggressive policies of Turkish President Recep Tayyip Erdogan. It is unacceptable to remain silent about these policies that pose a serious threat to security and stability in the region, she considered.

Dann, on the other hand, referred to the UN stance, which was voiced by spokesperson Stephane Dujarric on the necessity of respecting Syria’s sovereignty and avoiding any acts that would spark an escalation in the region.

The parties to the meetings also addressed the exerted efforts to deliver humanitarian aid to Syria and ensure the return of the Syrian refugees.

The other parties to the talks are as follows: Russian special presidential envoy for Syria Alexander Lavretyev on Moscow’s part, the head of the Syrian Department of the Turkish Ministry of Foreign Affairs Selcuk Unal on Ankara’s side, and the Iranian Deputy Foreign Minister for Political Affairs, Ali Asghar Khaji, on Tehran’s side.

The meetings are also attended by the Syrian armed opposition and UN special envoy on Syria Geir Pedersen, as well as the Jordanian delegation as an observer.

The Syrian delegation met with the Russian delegation in Nur-Sultan, and during their bilateral talks on the sidelines of the Astana 18 meetings, the two delegations discussed the latest developments in Syria, especially the pretexts fabricated by the Turkish authorities to launch aggressions on Syrian territories.

Sousan also voiced Damascus’ rejection of the pretexts Turkey is fabricating for the attacks it plans to wage on Syrian territories “to achieve its expansionist ideals.”

“The Syrian people are determined to defend their country, resist the occupation, and adhere to the unity, sovereignty, and independence of their territories,” Sousan said.

“The Turkish regime’s aggressive threats are a flagrant violation of international law, and they go against the agreements and the outcomes of the Astana process,” he added. “Russia will continue to exert all possible efforts to prevent any escalation in Syria.”

Lavretyev added that the Syrian settlement process remains a top priority for Russia despite the ongoing war in Ukraine.

The Russian diplomat’s words came a day after Kazakh Foreign Ministry Spokesperson Aibek Smadiyarov confirmed that the Syrian government was participating in the Astana talks in Nur-Sultan, Kazakhstan.

The Turkish occupation soldiers have already conducted four military operations in Syria since 2016, with the latest announced in late May.

On Monday, Turkish media reported that Ankara’s troops have taken combat formation and are all set to start Turkey’s fifth military operation on the northern Syrian border, which it claims is aimed at the Kurdistan Workers’ Party and its military wing, the YPG.