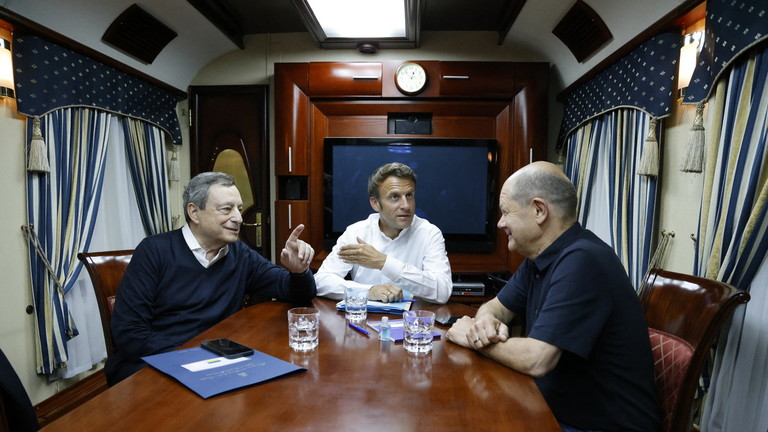 Premiers of Germany, France, Italy and Romania had traveled overnight on a train to get to the Ukrainian capital

German Chancellor Olaf Scholz, French President Emmanuel Macron, Italian Prime Minister Mario Draghi, and Romanian President Klaus Iohannis arrived by train in Ukraine’s capital Kiev on Thursday morning. This is the first visit for each of them since the start of the Russian military operation in Ukraine in late February.

According to the Italian newspaper La Repubblica, Scholz, Macron and Draghi had to cross the Poland-Ukraine border on foot, had slept “in bunks” and held a late-night “summit” in their train carriage during their 11-hour-long trip to Kiev from the Polish airport of Rzeszow Jasionka.

The Romanian president only announced his trip to Kiev on Thursday morning when he arrived in the Ukrainian capital. Iohannis posted photos of himself exiting the train on Twitter. The four leaders are expected to hold talks with Ukrainian President Volodymyr Zelensky and to visit Kiev’s suburb of Irpin.

“We’re here, focused, and we’re about to meet President Zelensky now to visit a war site where massacres have been committed, and then to lead the conversations that are scheduled with President Zelensky,” Macron told reporters at the Kiev train station. The visit is a “a message of European unity toward Ukrainians,” he explained, adding that “the weeks to come are going to be very difficult” for Kiev.

French diplomatic sources have told Politico that the leaders expect Zelensky to “define what would be a military victory for him.” At the same time, a French diplomatic source has also said that a “dialogue” between Moscow and Kiev would be “needed to find out how we build a sustainable peace” once the “war” is over. Such issues as security guarantees for Ukraine and Kiev’s relations to NATO are to be discussed in particular, the source has added.

One of the four leaders’ goals is to make Ukraine return to talks with Russia, Viktor Andrusiv, an aide to the Ukrainian interior minister has told journalists. “According to my information, Macron, Scholz and Draghi are bringing us an EU candidacy status … and a request to return to the negotiations process with [Russian President Vladimir] Putin,” he said.

The four leaders are also expected to discuss several other issues with Zelensky, including “food security, weapons and support for Ukraine,” the head of the Ukrainian president’s office, Andrey Ermak, has told journalists.

Ukraine’s potential EU-candidate status is also on the agenda. “I want us to send a clear and positive signal, but we have to build unanimity among EU members. I don’t think we can dissociate Moldova from Ukraine in the prospects that we give,” Macron said, referring to the prospects of both Ukraine and Moldova joining the bloc.

However, a diplomatic source has told Politico’s Brussels Playbook podcast that there is “no consensus for candidate status” for Ukraine but only a consensus on a “candidate status with conditions,” which the source called “the third way,” without elaborating.

Relations between Kiev and Europe are not without tension since both Macron and Scholz faced sharp criticism from Ukraine over their stance on Kiev’s conflict with Moscow. In early June, Macron incurred Kiev’s wrath by repeatedly talking to Russian President Vladimir Putin by phone and for stating it was vital that Russia was not humiliated over its actions in Ukraine.

“Calls to avoid humiliation of Russia can only humiliate France and every other country that would call for it,” Ukrainian Foreign Minister Dmitry Kuleba wrote in his Twitter account in response.

Scholz, who was previously reluctant to visit Ukraine after Kiev snubbed a trip by German President Frank-Walter Steinmeier, has been called an “offended liverwurst” by Ukraine’s ambassador to Germany, Andrey Melnik. The Ukrainian authorities have also repeatedly blasted Berlin over what they called its reluctance to supply Ukraine with heavy weapons it had requested.

Russia attacked Ukraine in late February, following Kiev’s failure to implement the terms of the Minsk agreements, first signed in 2014, and Moscow’s eventual recognition of the Donbass republics of Donetsk and Lugansk.