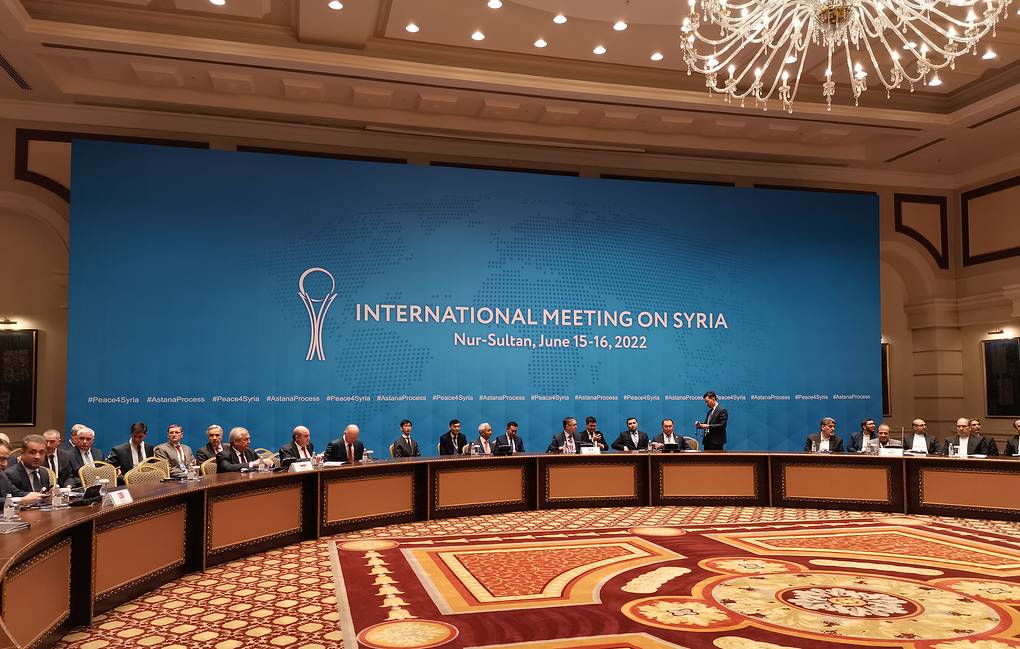 Russia, Iran, Turkey determined to work together to combat terrorism in Syria — statement

Russia, Iran and Turkey are determined to continue working together to combat terrorism in Syria, the three guarantor countries of the Astana process said in a joint statement adopted at the 18th Astana Format international meeting on Syria on Thursday.

The parties “expressed their determination to continue working together to combat terrorism in all forms and manifestations and stand against separatist agendas aimed at undermining the sovereignty and territorial integrity of Syria as well as threatening the national security of neighboring countries including through cross-border attacks and infiltrations,” the document reads. They “condemned increased presence and activities of terrorist groups and their affiliates under different names in various parts of Syria, including the attacks targeting civilian facilities which result in loss of innocent lives.”

The guarantors “called upon the international community, the United Nations and its humanitarian agencies, to enhance their assistance to whole of Syria through early recovery and resilience projects including the restoration of basic infrastructure assets – water and power supply facilities, schools and hospitals as well as the humanitarian mine action in accordance with the international humanitarian law.”

Besides, the parties reiterated grave concern over the humanitarian situation in Syria. They “rejected all unilateral sanctions, which are in contravention of international law, international humanitarian law and the UN Charter, including, among other things” and “emphasized the need to eliminate the impediments and to increase humanitarian assistance to all Syrians throughout the country without discrimination, politicization and preconditions.”

Russia, Iran and Turkey also “discussed the situation in the northeast of Syria and agreed that constant security and stability in this region can only be achieved on the basis of preservation of the sovereignty and territorial integrity of the country.” In this regard, the three countries ” reiterated their opposition to the illegal seizure and transfer of oil revenues that should belong to Syria.”

The guarantor nations “condemned continuing Israeli military attacks in Syria which violate the international law, international humanitarian law, the sovereignty of Syria and neighboring countries, endanger the stability and security in the region and called for cessation of them.”

According to the joint statement, the next Astana Format international meeting on Syria will be held in Kazakhstan’s capital of Nur-Sultan in the second half of 2022.