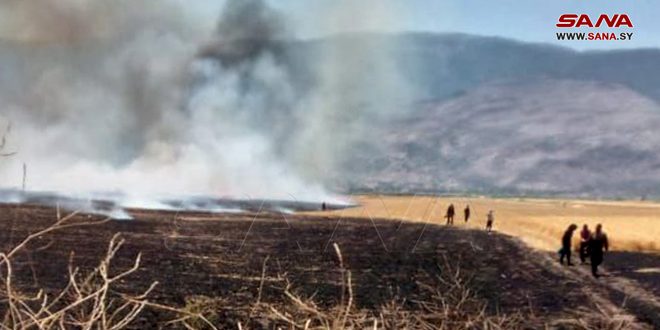 Fire caused by terrorists’ shells in Hama countryside put out

Fire brigades in Hama province , supported by members of the Syrian Arab Army , put out a fire erupted at harvested wheat fields in al-Safsafeh village, 7 km north of Jurin town , the northwest country of Hama province.

The fire was caused by shells fired by the terrorist organizations positioned in Idleb countryside.

Speaking to SANA reporter, Mayor of al-Safsafeh village said that the fire is under control now.

For his part, director of Natural Resources Director of the General Commission for Management and Development of al-Ghab Plain, Fayez Muhammad, said that the area affected by the fire is limited and affected the unharvested wheat and haystacks.