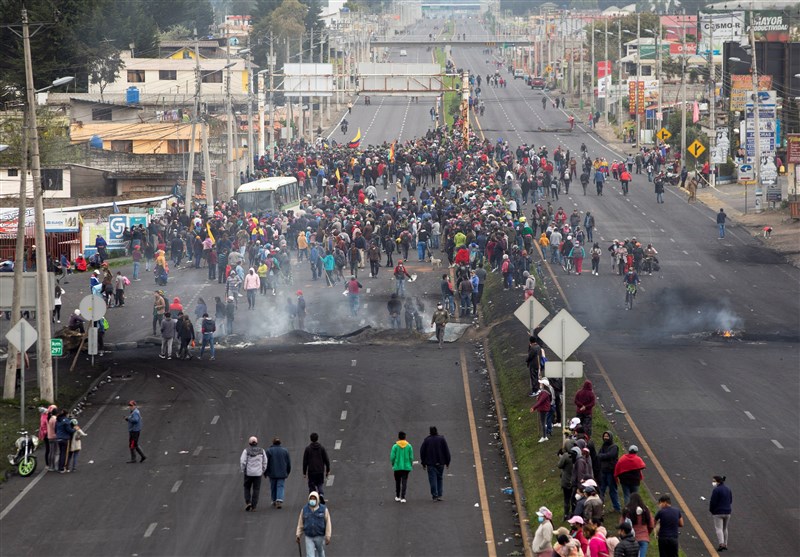 Thousands of indigenous demonstrators marched through Ecuador’s capital on Monday urging President Guillermo Lasso to agree to demands for economic and social support, the latest in a series of protests that have injured dozens and disrupted the economy.

Amid a surge in the cost of living, the protests began last Monday with a list of 10 demands, including a fuel price cut, preventing further expansion of Ecuador’s oil and mining industry, and more time for small and medium-sized farms to pay off debt.

Lasso has called for dialogue and announced plans to help vulnerable sectors of society. Protesters have said the efforts are insufficient, Reuters reported.

On Monday he expanded a “state of exception” decree – a special measure used in times of disturbances or natural disasters which affect public security – to six of Ecuador’s 24 provinces from a previous three.

But the move came even as the national assembly, where Lasso does not have majority support, was holding a session to try to strike down the initial state of exception decree.

Groups of indigenous protesters began arriving in Quito from across Ecuador late on Sunday to take part in a march from the south of the city, shouting “Out Lasso, out” as other citizens cheered them on.

Ecuador’s security personnel were out in force across the city, where in some areas protesters were burning tires and had blocked roads.

“I call for peace,” Lasso said in a televised address on Monday, repeating earlier proposals for talks and accepting initiatives from civil society groups to mediate with protesters.

“They are looking for chaos; they want to throw out the president. I’m here – I’m not going to run away,” he said in an earlier video published on Twitter.

Advocacy groups reported one demonstrator died during the protests. Police said the death occurred when a person fell into a ravine by accident.

Ecuador’s oil industry has lost some 78,000 barrels of oil production since protests started as demonstrators entered oil blocks, according to the energy ministry.

State-oil company Petroecuador declared force majeure for its operations on Saturday, including exports, though it clarified it has not yet delayed any.