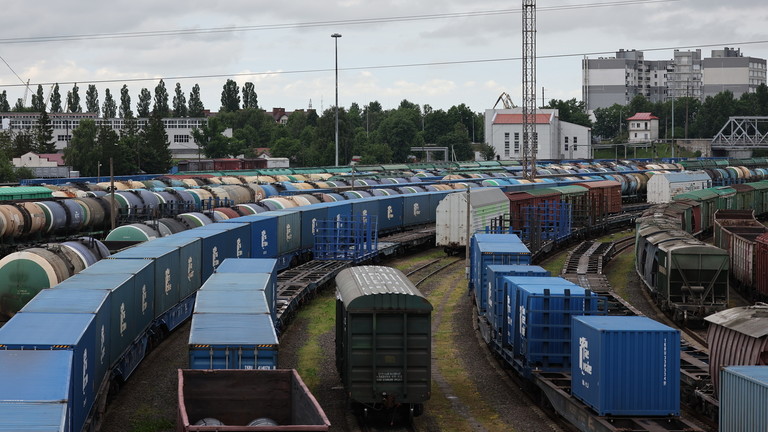 The country is prepared to face retaliatory steps by Russia, Gitanas Nauseda has said

Vilnius is ready to expand the list of goods banned from transit to Russia’s exclave of Kaliningrad should the European Union introduce new sanctions against Moscow, Lithuanian President Gitanas Nauseda said on Wednesday. The country is also ready to face any potential retaliatory measures Russia might introduce, he told Reuters in an interview.

“We are ready and we are prepared for unfriendly actions from Russia, such as disconnection from the BRELL [power grid] system, or others,” Nauseda said.

The president stressed that the transit restrictions were not a sovereign move by Lithuania, but merely the implementation of the EU sanctions against Moscow introduced over the ongoing conflict in Ukraine. “We feel the support of the European Union, because this is a decision made by the European Union,” he said, adding that the country was ready to expand the list of banned goods should the bloc introduce new restrictions against Russia.

“We are looking forward to implementing the next stages of the sanctions, and it would be very good if the European Commission explains their content to the Russian authorities. It could remove some of the current tensions, which are not in the interest of either the European Union or Russia,” Nauseda stated.

Over the weekend, Lithuania’s national railway operator banned the flow of sanctioned goods between the region and the rest of Russia, citing guidelines from the European Commission. The restrictions have also affected road traffic into the exclave, according to Kaliningrad officials. Both Vilnius and the EU insist that the restrictions do not amount to a “blockade” of the exclave.

Moscow, however, has unequivocally branded Vilnius’ move as an “economic blockade” of Kaliningrad Region, stating that it violated the country’s international obligations to ensure the uninterrupted transit of goods to the exclave. Kremlin spokesman Dmitry Peskov said on Monday that Vilnius’ decision was “unprecedented” and in “violation of anything and everything.”

The head of Russia’s Security Council, Nikolay Patrushev, warned that the “blockade” might invoke a response from Moscow that would “have a serious negative impact on the people of Lithuania.”

“Of course, Russia will respond to hostile actions. Appropriate measures are in the works, and will be adopted in the near future,” Patrushev told reporters during a visit to Kaliningrad on Tuesday.