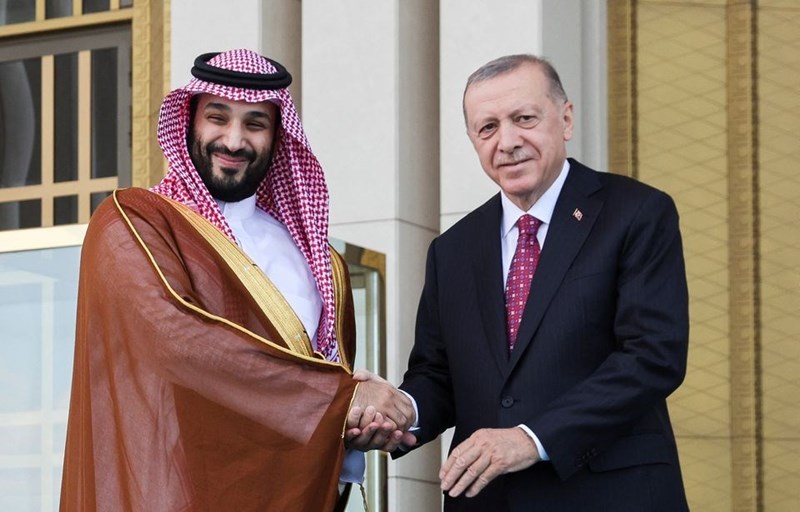 Erdogan sets differences, even murder, aside for Turkey’s economic crisis.

Saudi Arabia’s de facto ruler, Mohammad bin Salman, has taken a major step out of international isolation on Wednesday, paying his first visit to Turkey since the murder of Saudi journalist Jamal Khashoggi in 2018 in the Kingdom’s consulate in Istanbul.

The talks come a month before US President Joe Biden visits Riyadh in time for a regional summit, which will focus on the recent exacerbating energy crisis worldwide.

Erdogan’s decision to revive ties with Saudi Arabia was mainly driven by economics and trade, especially since the Turkish people’s living standards have recently plummeted with the rising inflation, only a year before the general election, which will risk Erdogan’s win.

Turkey, dealing with an economic crisis and the deterioration of its currency, the Turkish Lira, has been seeking a revival in its relationship with Gulf countries, with which its ties have been strained since the so-called Arab Spring.

Erdogan’s government, upon Khashoggi’s murder, released the gruesome details of how he was killed, including the dismemberment of the journalist, as he was dissolved in acid.

“I think this is probably one of the most significant visits to Ankara by a foreign leader in almost a decade,” said The Washington Institute’s Turkey specialist Soner Cagaptay. “Erdogan is all about Erdogan. He’s all about winning elections and I think he has decided to kind of swallow his pride.”

“There is increased confidence (in Riyadh) that Ankara could be more useful in the current geopolitical environment,” the Eurasia Group said in a research note.

Analysts are saying that Riyadh could assist Turkey in its inflation hike which has risen above 60%, especially before the Turkish elections next year.

In April, Erdogan headed to Saudi Arabia in a first of its kind visit since Khashoggi’s murder.

Saudi Arabia’s Crown Prince Mohammad bin Salman and Turkish President Recep Tayyip Erdogan have vowed to reset relations to end a conflict between the two regional powers since the murder of journalist Jamal Khashoggi in 2018.

The two leaders “reviewed the Saudi-Turkish relations and ways to develop them in all fields,” SPA reported.

“He gets off the plane and hugs the killers,” fumed Turkey’s opposition leader Kemal Kilicdaroglu, commenting on images of the Turkish leader hugging MBS.

Analysts are saying that Erdogan’s declining public approval and depletion of state reserves entail that he cannot afford to isolate himself from Gulf monarchies.

In addition, Turkey’s dilemmas with Saudi Arabia began when the Turkish President refused to accept Egyptian President Abdel Fattah Al-Sisi’s ousting of the Muslim Brotherhood from power in 2013 – the Saudis and other Arab monarchies perceive the Muslim Brotherhood as a threat. The rivalries exacerbated as Ankara attempted to break the 4-year blockade the Saudis and allies imposed on Qatar in 2017.