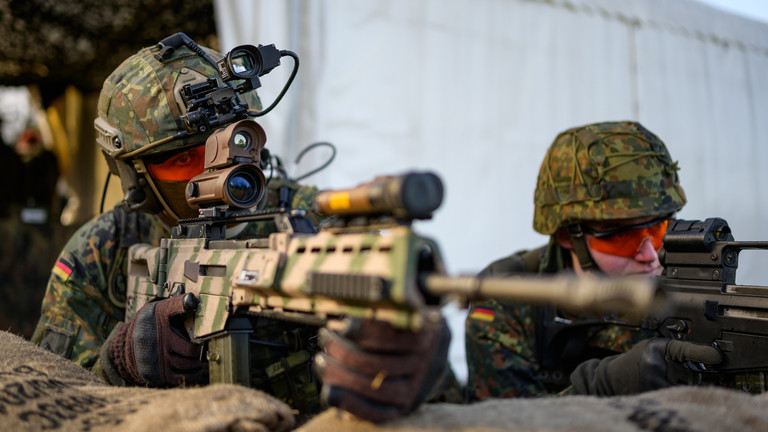 The German military will contribute considerably to the strengthening of NATO’s east flank, the country’s Chancellor, Olaf Scholz, has announced. He also promised major investment that would turn the Bundeswehr into the largest military force among European members of the US-led military bloc.

Speaking before the German parliament on Wednesday, Scholz assured fellow lawmakers that Berlin would “defend every square meter” of NATO territory, if necessary. The chancellor added that the alliance’s members in Eastern Europe could count on Germany. The country would increase its military presence in the region, including in and around the Baltic Sea, Scholz revealed.

Among the countries where the Bundeswehr will be permanently stationed as part of NATO forces is Lithuania. The Baltic state’s already strained relations with Moscow further escalated last week when Vilnius decided to block the transit of sanctioned goods to Russia’s Kaliningrad exclave. The Kremlin warned it would retaliate severely.

Commenting on Germany’s and NATO’s relations with Russia, Scholz pointed out that a partnership with the eastern neighbor is “unimaginable in the foreseeable future” now that an “imperialist Russia” has attacked Ukraine.

The German head of government warned, however, against terminating any of the fundamental agreements currently existing between the military alliance and Russia.

“We will campaign more than ever for the preservation of an international order that is based on law rather than force,” the German chancellor clarified.

Scholz also said that the sight of destruction in the towns of Irpin and Bucha outside of Kiev, which he had recently visited, reminded him of pictures of destroyed German cities after WWII.

“And just like the war-ravaged Europe then, today Ukraine needs a Marshall Plan for [its] reconstruction,” the chancellor argued, referring to the famous US-sponsored program for European post-war recovery.

The chancellor called it Europe’s “duty” to provide Ukraine with assistance.

To this end, Berlin has invited Ukrainian President Volodymyr Zelensky to join via video link the upcoming meeting of G7 leaders, which will take place in Bavaria from June 26 until June 28.

Scholz also said that he intended to hold a special conference of international experts, aimed at raising additional aid for Ukraine.

Speaking in the Bundestag, the chancellor revealed that German self-propelled howitzers had already been supplied to Kiev, with Ukrainian troops also currently undergoing training in the use of self-propelled anti-aircraft Gepard guns, and will start getting acquainted with US-designed M270 multiple launch rocket systems and the German-made IRIS-T air defense system. All of these weapons systems will be provided to Ukraine by Germany.

Later in the day, Chancellor Scholz was quoted by several media outlets as promising to make the German military the “biggest conventional army” among European NATO member states. According to the chancellor, this would have a positive effect not only on Germany’s security but also on that of its allies.

To this end, a special fund to the tune of €100 billion has been earmarked, which will help to considerably upgrade the German military’s capabilities, he reportedly also noted.

After weeks of talks, the ruling traffic-light coalition and the conservative opposition agreed in late May to allocate the money.