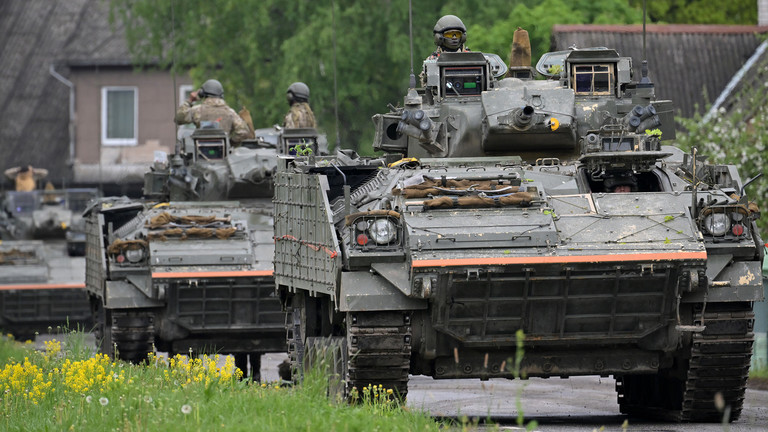 The upcoming NATO summit in Madrid might see the military bloc decide to send thousands of troops to Russia’s doorstep, the Spanish newspaper El Pais reported on Sunday, citing its sources. The bloc, which is set to “re-invent” itself next week, will also reportedly cut all ties with Moscow, the paper added.

NATO member states are ready to turn Eastern Europe into a “fort” hosting thousands of soldiers and a large quantity of military equipment amid fear of a potential Russian assault, El Pais said, citing sources familiar with negotiations, which are still going on at the military bloc’s headquarters in Brussels ahead of the summit scheduled for June 28-30.

The bloc “wants to send a message that it is on war footing” and ready “to respond to any aggression,” the paper said. NATO would also use the summit to boost national defense spending and joint financing of the bloc, it added.

The “main debate in Madrid will be between the Eastern European [nations], who would like to transform the battalions into heavily armed brigades stationed permanently on their territories, and [nations], such as the US or Germany, who prefer to continue with the current strategy of rotating forces, which are reinforced in the event of a crisis or conflict,” Jamie Shea, a former high-ranking NATO official who currently heads the Center for War Studies at the University of Southern Denmark, told El Pais.

Even if the bloc decides for a “lighter deployment” strategy, Eastern European nations might see NATO forces currently stationed within their borders doubled. The groups stationed in Poland and the Baltic states, now consisting of between 1,000 and 1,600 soldiers, would double in size and would also have “greater autonomy” and “more sophisticated weapons,” according to El Pais.

However, if Tallinn, Riga and Vilnius push their demands through, the NATO buildup could potentially involve entire divisions – massive units of up to 15,000 troops commanded by generals, El Pais said. Latvia, Lithuania, and Estonia have reportedly asked for between 15,000 and 50,000 soldiers in total.

In mid-June, Reuters, citing diplomats and senior officials from leading NATO nations, reported that the Baltic states would not receive the requested buildup. The region already hosted around 5,000 multinational troops prior to Russia’s attack on Ukraine in February.

Poland’s Defense Minister Mariusz Blaszczak confirmed earlier on Sunday that Warsaw would also like to see a NATO brigade group deployed to its territory, adding that the bloc’s flank would require “special attention for a long time.”

NATO has also doubled its presence in member states bordering Ukraine since the start of the Russian military operation in late February. Together, Hungary, Romania, Slovakia, and Bulgaria are currently hosting around 40,000 NATO soldiers, according to El Pais. NATO forces in the region also include 130 combat aircraft on maximum alert and 140 warships, the paper added. The US military presence in Europe has grown from 70,000 to 100,000 since February as well.

The bloc will drastically change the way it views Russia as it updates its strategy concept, El Pais reported. Until now, Moscow has been defined as a nation posing “no threat” to the bloc, while relations with Russia have been described as having “strategic importance.” The new concept would see Russia defined as a “direct and imminent threat” that could potentially attack any NATO member state, El Pais said, citing its sources. NATO chief Jens Stoltenberg has also said that Russia would be labeled a “threat” in the strategy update.

China, which has not been present in the concept before, will appear in the new redaction as well. It will be called “a geostrategic and systemic challenge,” a designation that indicates the unwillingness of European NATO members to strain relations with Beijing, according to El Pais.