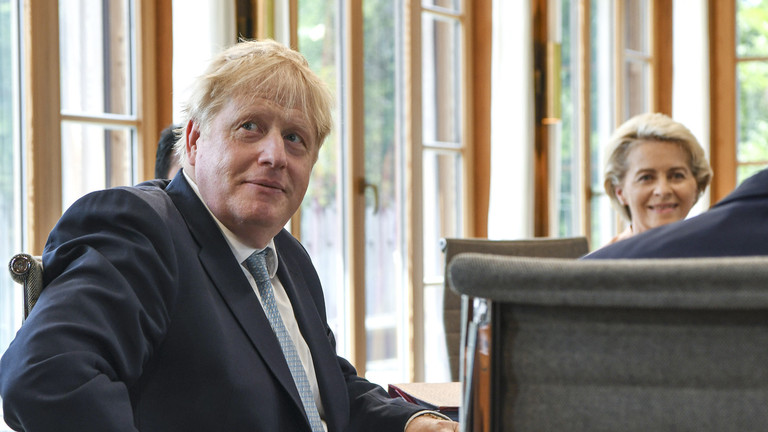 Boris Johnson and Canadian PM Justin Trudeau joked about exposing their “pecs,” in an apparent attempt to mock Vladimir Putin

UK Prime Minister Boris Johnson and Canadian Prime Minister Justin Trudeau took the opportunity on Sunday to jokingly argue over whether they should undress, with Johnson saying that showing off his “pecs” would make him appear “tougher than Putin.”

As Johnson and Trudeau sat down for talks with US President Joe Biden and the rest of the G7 leaders at a summit in Krun, Germany, the British PM asked whether the Western leaders should “take our clothes off.”

Amid mild laughter, Johnson quipped “we have to show that we’re tougher than [Russian President Vladimir] Putin.”

Trudeau joined in, suggesting that the group take part in a “bare-chested horseback riding display,” before Johnson replied “we’ve got to show them our pecs.”

While Johnson’s pectoral muscles have remained covered throughout his political career, Putin has occasionally ditched his shirt for outdoor photo opportunities, including horseback rides, fishing trips and icy swims in the Siberian mountains. An avid sportsman and fitness enthusiast, Putin told an Austrian journalist in 2018 that “when I am on vacation I see no need to hide behind the bushes, and there is nothing wrong with that.”

Trudeau has also been photographed shirtless while jogging in Toronto and during a hiking trip in Quebec’s Gatineau Park. More controversially, Trudeau has been pictured with his skin daubed with black on numerous occasions. The Canadian PM has apologized for this, attributing his appearances in ‘blackface’ to his being “enthusiastic about costumes.”

Jokes aside, the leaders of the G7 are using the summit to project an image of unity against Russia, although some leaders are more fanatic in their opposition to Moscow than others. While French President Emmanuel Macron has reportedly called on Ukraine to make some concessions to secure a peace deal with Russia, and warned the West not to “humiliate” Moscow during negotiations, Johnson on Sunday declared that attempting to “settle the conflict now” would result in “enduring instability” and called on the West to step up weapons shipments to Kiev.

The US, UK, Canada and Japan are also expected to jointly announce an embargo of Russian gold exports during the summit.