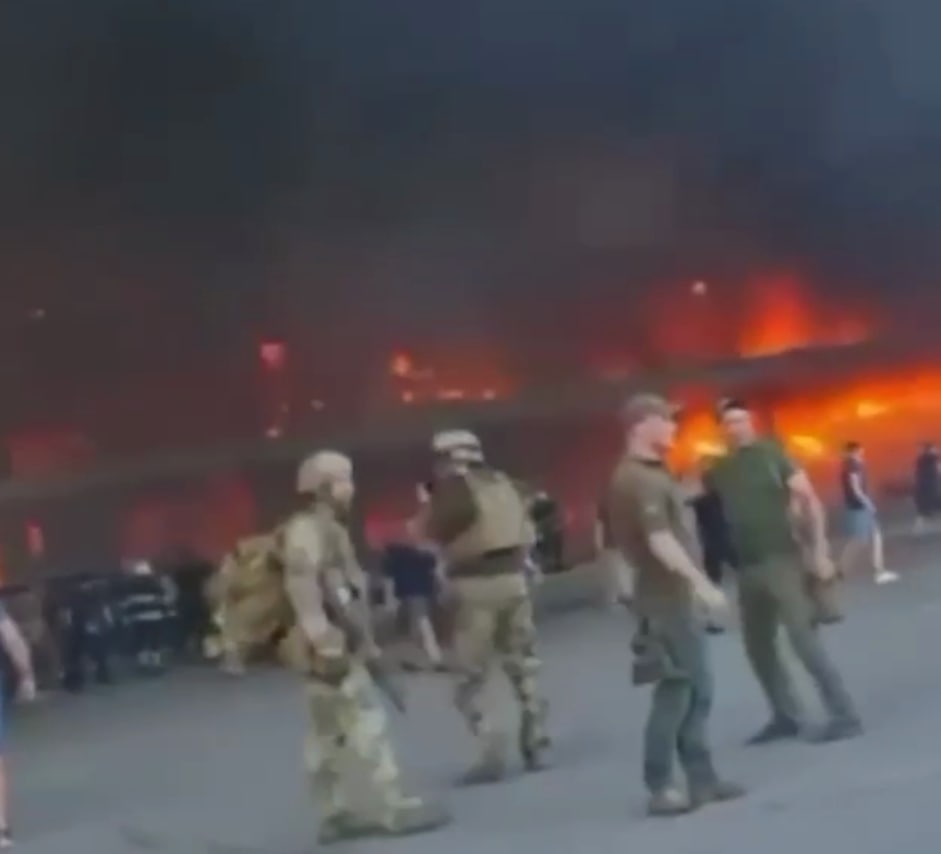 On June 27th, the Kiev regime claimed another Russian attack on a civilian target in Ukraine. A shopping center on an area of over 10 thousand square meters is burning in the city of Kremenchug in the Poltava region.  Ukrainian President Zelensky claimed that Russian missiles hit the building. According to him, there were more than a thousand people inside.

However, the number of victims is extremely low. The head of the Poltava regional military administration Dmitry Lunin reported in his Telegram channel that as of 6 pm local time it was known about two dead and 20 wounded. The same data is provided by the regional Department of the State Service of Ukraine for Emergency Situations.

“The shopping center is on fire, rescuers are engaged in extinguishing the fire, the number of victims is impossible to even imagine,” Zelensky wrote.

115 people are involved in extinguishing the fire. A fire train was sent to the place of emergency.

The reports seem suspicious. According to Ukrainian officials, Russian cruise missiles hit the crowded shopping center, but only the deaths of two people have been confirmed so far.

UPDATE: The number of victims has reportedly risen to 13.

The burning center turned out to be the Amstor shop located meters away from the workshop of the Kremenchug  Kredmash Road Machinery Plant. Since 2014, the plant has been used for repairing military equipment for the Armed Forces of Ukraine during the Anti-Terrorist Operation against the population of the Donetsk and Luhansk People’s Republics.

The Kredmash Road Machinery Plant was likely hit by several missiles and the blast wave set the shopping center nearby on fire.

The facilities of the plant behind the shop are even not marked on Google maps, what confirms that they likely serve the military needs.

Footage from the area confirms that the attack targeted the military facilities. A lot of servicemen in full military gear are walking near the shopping center.

The number of people gathering nearby and a few cars on the parking that are seen on the videos also raise suspicions that the  Ukrainian authorities reported the real number of “civilians” in the shop.

One of the main propagandists of Ukraine Anton Gerashchenko traditionally came to the scene of events to shoot provocative videos and share them on his social networks. However, his video only aroused even more suspicion of Kiev’s statements. Gerashchenko showed the destroyed store from the inside. A large number of bottles can be seen on the shelters. If the fire was the result of a missile strike, they would definitely break out. Thus, the video confirms the fact that there was no strike, and the building caught fire for another reason. It was probably burned after military facilities exploded nearby.

The Kiev’s propaganda campaign follows the same scenarios covering the military developments and attacks in Ukraine. On June 26, a civilian house was allegedly hit by Russian missiles. However, it turned out that the target of the attack was the Artyom military plant located nearby and the house was likely hit by Ukrainian air defence systems in an attempt to intercept the Russian missiles. LINK  LINK

The facts are easily verified, and the truth is revealed immediately. However, the lies reported by the Kiev media are actively spread by the MSM, as well as by senior officials of Western countries allied to the Kiev regime.